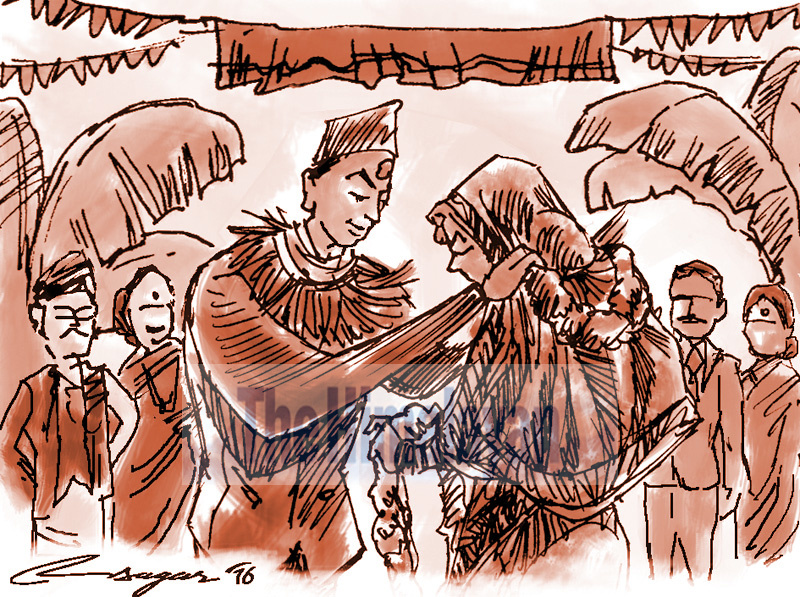 Illustration: Ratna Sagar Shrestha/THT
Bajura, May 17 Kabita Bohora of Himali Rural Municipality had to abandon her studies after she appeared in the Secondary Education Examination. She then got married off at the age of 16. Bohora had to discontinue her studies not because of marriage as often happens in far-flung districts of the country. Bohora had to quit further studies due to lack of schools that run classes up to Grade XII in her village. “No school runs Grade XI and XII in my village, and I cannot go to other places for financial reasons,” Bohora complained, adding, “Due to lack of a plus-two, girls in my village are forced to get married after SEE.” Majority of girls from Wards 1, 2 and 3 of Himali Rural Municipality get married after they complete Grade X. “Majority of households in these wards cannot afford to send their daughters for higher education to places away from the village,” said Chandrakala Budha, Himali Rural Municipality vice-chair. Ward No 1 Chair Laljit Thapa said as many as 62 students, including 24 girls had appeared for SEE last year. Of the 24 girls, only three left the village to continue their studies while others were forced to quit studies. “Most of the girls, who quit studies, have already married,” he added. It takes three days for SEE-appeared students from the village to reach Jana Prakash Secondary School of Budhinanda Municipality and Ratapani Secondary School in Mugu to study in Grade XI. “Boys stay in the hostel and continue their studies. But, 90 per cent girls quit studies,” said rural municipality Chair Govind Bahadur Malla.
#Bajura #early marriage #Secondary Education Examination #Himali Rural Municipality
You May Also like: