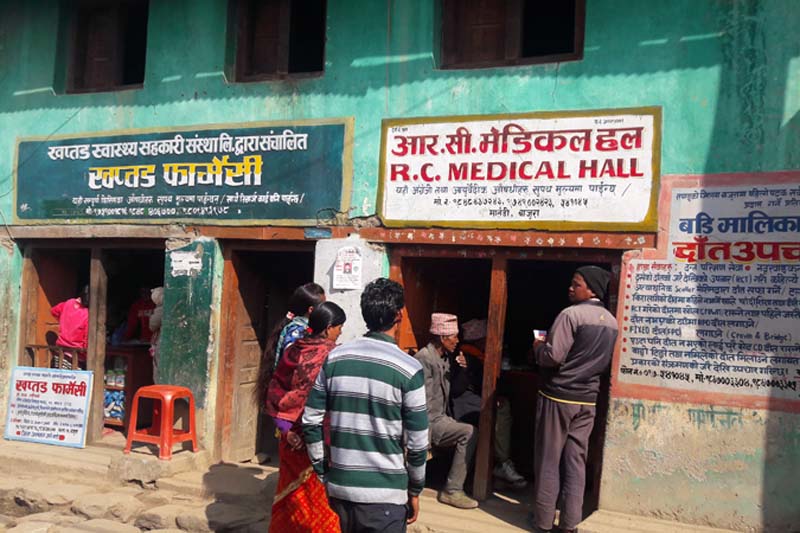 People of Bajura throng a medical store to buy life-saving drugs as the government health facilities fail to provide them for free, in this photo taken in Martadi of Bajura on Sunday, December 11, 2016. Photo: Prakash Singh
BAJURA: The remote district of Bajura in Far-Western Nepal is reeling under the shortage of essential life-saving drugs for last one month. Even the government health facilities do not have medicines which the government said it would provide for free, according to the District Police Office spokesperson Tej Singh Saud. "The most problematic are health posts in rural areas," Saud says, "There are no any cetamols, syringes and painkillers." As he says, 11 VDCs of the northern region are the most affected from this problem. Around 400 to 500 people visit various health centres of the district on a daily basis, but they are forced to return empty-handed for the want of medicines, he adds. Dr Durga Maharjan at the DPO says they have been referring the patients to private health institutions and medical stores. The government provides 70 types of medicines at government hospitals free of cost while the numbers of medicines available freely at primary health centres and health posts are 58 and 42 respectively. "The government has announced to distribute free medicines for us," a patient at the District Hospital, Hoijali BK, laments, "But, that is limited to papers only." She says she had to buy each and everything from a private medical store for her treatment. The district sees an annual transaction of medicines worth Rs 8 million in a year. The health workers, however, complain of shortage very often.
#Bajura #Martadi #Far-Western Nepal #Bajura District Police Office #life-saving drugs #Bajura medicine shortage
You May Also like: