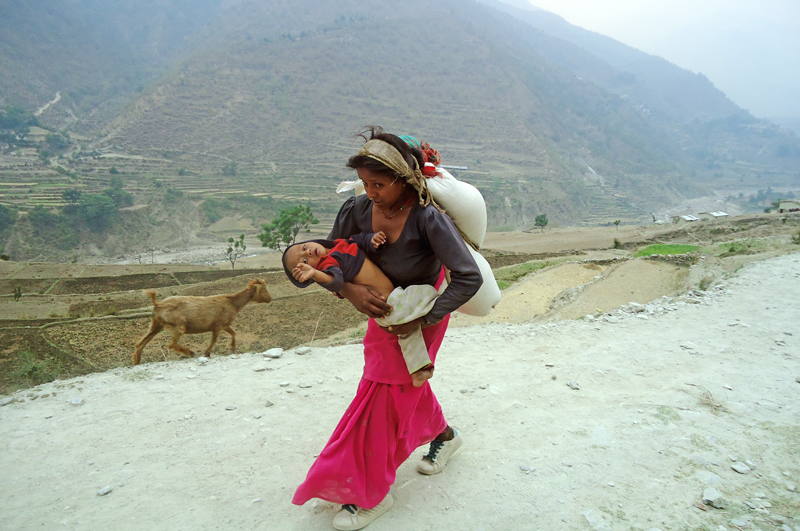 A woman travelling with a sack of rice on her back and with her child in her bosom from Kolti branch of Nepal Food Corporation to her house in Wai VDC on Sunday. Photo: THT
Bajura, September 13 Though ranked 74th in the District Human Development Index, Bajura occupies the 75th position in the district poverty index. According to 2011 Census, poverty rate is 64.1 per cent in the district. Data at the Central Department of Statistics in 2001 showed the poverty rate at 47.3 per cent. Information Officer Nir Bahadur Shahi at Bajura DDC said despite various programmes, the poverty rate has gone up. For the past two decades, Bajura has ranked last in HDI and poverty index. The government has spent more than Rs 400 million through Poverty Alleviation Fund for mitigating poverty in Bajura. “Millions of rupees are being spent for poverty alleviation by both the government and non-government sides, but in vain,” said Chairman Dev Bahadur Rokaya of Bajura Chapter of Federation of Nepalese Chamber of Commerce and Industry. Bane Sarki from Badeda of Barhabis VDC-1 left for India after he saw no employment opportunity at home. Sarki left for India at the age of 13. He is now 55 and still continues working as a daily wage earner in India. Many locals from Bajura have no choice but to migrate to India for jobs to eke out their living. Many poverty mitigation projects have been launched in Bajura. They, however, are yet to be completed. Construction of the 57-kilometre Sanfe-Martadi road began some 20 years ago and it is nowhere near completion after two decades. More than 90 per cent people in the district rely on agriculture for livelihood. The adoption of conventional agro-system has disrupted the modernisation of agriculture. Not only in Bajura, the poverty level is increasing in the entire far-west region instead of declining. A survey carried out by the Central Department of Statistics in 2001 showed the poverty ratio at 44.6 per cent in the region. After ten years, in 2011, the poverty level climbed to 47.1 per cent. Among the far-west districts, Kanchanpur has the lowest poverty rate of 31.4 per cent. The district ranks 51st in the country. Kailali ranks 55th in terms of poverty index. The remaining seven districts in the far-west rank above 65th position in the index.
#Bajura #Poverty Alleviation Fund #Human Development Index (HDI) #poverty index #Central Department of Statistics
You May Also like: