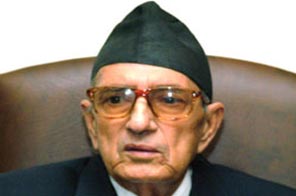 KATHMANDU: Nepali Congress president Girija Prasad Koirala today said Nepal’s peace process was not on the brink of failure as portrayed by UN Secretary General Ban Ki-moon in a report published yesterday.
In a meeting with the ambassadors of European countries at his residence, Koirala, according to his foreign relations advisor Dr Suresh Chalise, told the delegates that the first meeting of the recently formed High Level Political Mechanism (HLPM) scheduled on January 18 would initiate work to clear the hurdles in the peace process.
During the meeting, ambassadors from England, Germany, France, Denmark and Finland expressed concern about the pessimistic report of the UN chief. In the report to the UN Security Council, Ban said consensus through mutual dialogue was getting more and more difficult in Nepal due to the rigid stances of the Maoists and the government. He also said various political developments in Nepal had obstructed the peace process.
“Geographically distanced from Nepal, Ban is less informed about Nepal’s internal dynamics and undercurrents. However, the political situation has moved in a positive way with the formation of the HLPM,” Dr Chalise quoted Koirala as telling the envoys.
“I hope the HLPM will find solution to all contentious issues of the peace and the constitution writing processes,” Koirala said, informing the envoys that he was scheduled to talk with Prime Minister Madhav Kumar Nepal soon as to how to rehabilitate and integrate Maoist combatants.
The ambassadors, during the meeting, expressed concern over the latest political developments.

#Ban mistaken about peace process: GPK
You May Also like: