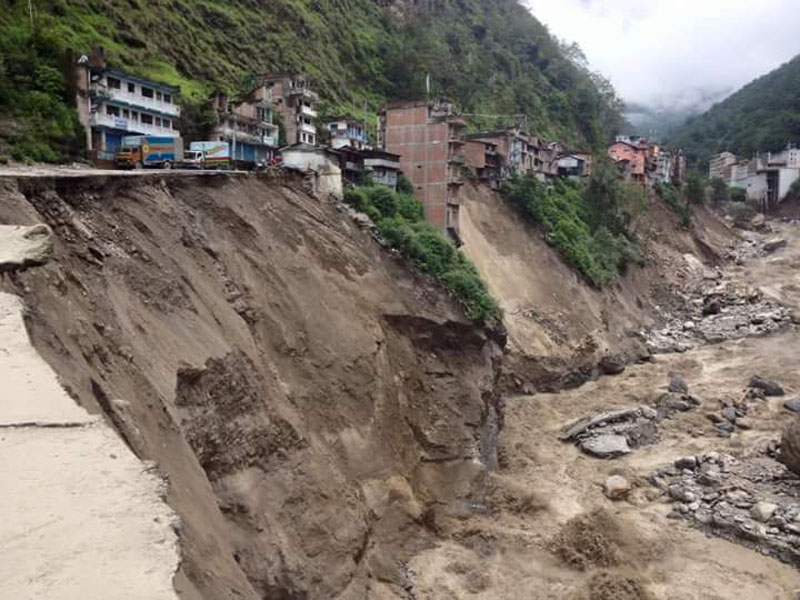 The deadly earthquake of last year had devastated Liping and Tatopani Bazaar of Sindhupalchowk. Before these places could recover, flood in the Bhote Koshi River has left these towns so battered that reconstruction seems impossible.

Of the 200 houses in Tatopani and Liping bazaars, the Bhote Koshi flood has washed away 67 houses till today noon, police said.

The flood in the Bhote Koshi River triggered by heavy rain across the border in China from last Tuesday night had wreaked havoc in Tatopani and Liping bazaars.

Inspector Khumlal Bhusal said that though the water level had gone down in the river, erosion caused by the river in the bazaar area was responsible for the destruction. “If the water flow remains as it is now, no house will stand in the two bazaars,” Inspector Bhusal said. Bhusal said that some houses had sunk into the river today as well.

Lakpa Sherpa of Kodari said that some of the people with buildings in the bazaar area had gone to take stock of their dwellings and belongings. “The river is eating away the houses. Some are looking for their valuables and others want to assess the loss to their property,” Sherpa said.  According to Sherpa, there are around 100 people in Tatopani and Liping bazaars. Some locals are en route to Brahabishe.

Inspector Bhusal said that Tatopani and Liping bazaar areas were going to be depopulated. “People have been completely displaced. Even the police post has been displaced after the flood swept the office”, Bhusal added.

Nepali Army airlifted as many as 58 locals from Tatopani to Barhabishe yesterday. Some locals are taking shelter at a school in Kodari.

The rain-fed Bhote Koshi has eroded the road from Jambu to Tatopani at Gati VDC. Vehicular movement was disrupted from Thursday after the river eroded the road at many places along the Araniko Highway from Barhabishe to Tatopani.

Inspector Raju Pandey of Area Police Office Barhabishe said that they could not go to Tatopani as the road leading to the area from Barhabishe was eroded by the river. “If we have to go to Tatopani due to emergency, there is not road for vehicles to ply,” Inspector Pandey said.

Earlier, the flood in Bhote Koshi had damaged the Upper Bhote Koshi dam, inundated four industries, and swept away four vehicles. Similarly, one school, one Bailey bridge and one suspension bridge were swept away by the flood.

As the flood has eroded Miteri Bridge, there is slim possibility of the trade point between China and Nepal at Tatopani coming into operation any time soon.

Locals said that this kind of flood in the Bhote Koshi was not seen in the past 34 years. The flood in 1981 had washed away Miteri Bridge at the border point of Nepal and China and the cemented bridge towards Fulping. As many as 62 persons had lost their lives in the flood in 1997.