By THT Online
KATHMANDU: The bodies of Air Dynasty chopper crash victims, including Tourism Minister Rabindra Adhikari, have been brought to Tribhuvan University Teaching Hospital (TUTH) for post mortem. Seven vehicles have entered the Forensic Department premises of TUTH carrying the bodies of the deceased. 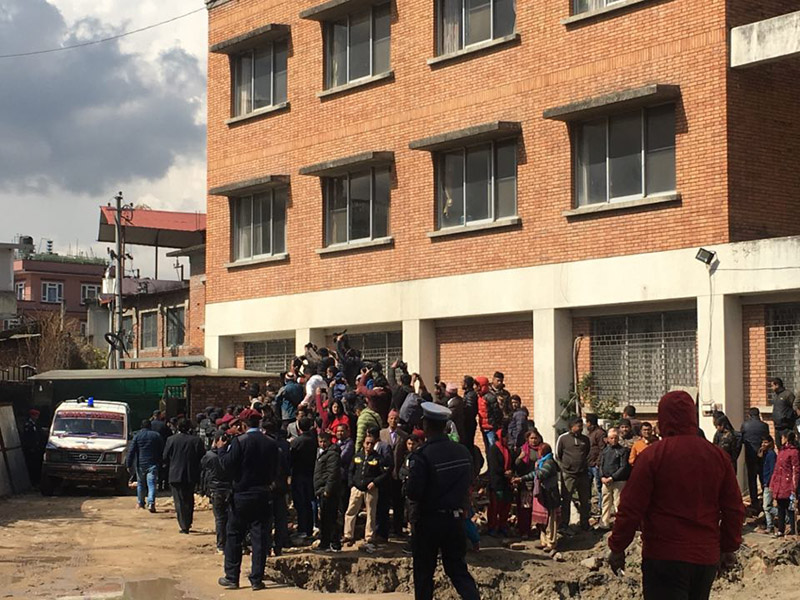 Photo: Ujjwal Satyal/THT
Security personnel, mediapersons, family members and well wishers of the deceased are waiting at the medical facility. Doctors have stated that the post-mortem is expected to take some more time. Therefore, final tributes at Tundikhel has been postponed for tomorrow morning from 8:00 am to 11:00 am, Nepal Communist Party (NCP) has confirmed. Earlier, the tribute programme had been fixed for 3:00 pm today.

Photo: Ujjwal Satyal/THT
- Ujjwal Satyal (UPDATED) KATHMANDU: The bodies of Air Dynasty chopper crash victims have been brought to Kathmandu. The Nepal Army helicopter carrying the bodies of the deceased has landed at Tribhuvan International Airport in the capital city. The bodies are now being taken to Tribhuvan University Teaching Hospital (TUTH) for post mortem. (UPDATED) Bodies of Air Dynasty crash victims airlifted from Taplejung

Photo: Ujjwal Satyal/THT
KATHMANDU: The bodies of Air Dynasty chopper crash victims have been airlifted from Taplejung and are being brought to Kathmandu. The Nepal Army MI-17s helicopter -- carrying the body of Tourism Minister Rabindra Adhikari along with six others -- has taken off from Taplejung after the weather conditions improved. The chopper is expected to land in Tribhuvan International Airport in about one and a half hours. Pilot of the helicopter Captain Prabhakar KC, tourism entrepreneur Ang Tshiring Sherpa, security personnel Arjun Ghimire, Under-Secretary at the Prime Minister’s office Yubaraj Dahal, Deputy Director General of Civil Aviation Authority of Nepal (CAAN) Birendra Shrestha, and CAAN Engineer Dhruba Das Bhochhibhaya lost their lives in yesterday's fatal incident along with Minister Adhikari. (UPDATED) Bodies of Air Dynasty crash victims brought to Taplejung airport

Photo: Ujjwal Satyal/THT
PANCHTHAR: Bodies of the seven persons, including Tourism Minister Rabindra Adhikari who lost their lives in yesterday's chopper crash in Pathibhara region, have been taken to Suketar Airport in Taplejung by Nepal Army. Bodies of four crash victims had been taken to Suketar following the crash yesterday while bodies of three others have been taken there from the incident site by Nepal Army today morning despite bad weather conditions. Chief District Officer of Taplejung, Anuj Bhandari, informed that the bodies were brought to the airport in Nepal Army's helicopter. According to him, weather condition has still not improved at the airport region due to which security personnel have to wait for improvement in weather to lift the bodies to Kathmandu. The CDO further informed that bodies of all deceased including the tourism minister would be sent to Kathmandu today itself after completing due procedures at Suketar Airport. The Air Dynasty chopper -- carrying seven people including Minister Adhikari and the pilot -- was on its way to Kathmandu via Pathibhara region after completing inspection of an under-construction airport at Chuhan Danda of Tehrathum when it crashed in Darebheer of Taplejung. No one survived the crash. (Reported by: Laxmi Gautam) READ ALSO:
#Taplejung airport #Air Dynasty crash
You May Also like: