— Rita Regmi, a resident of Jiwanpur 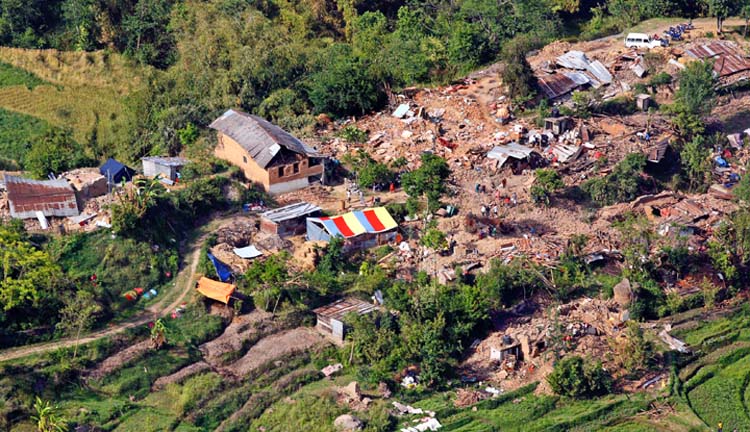 A view of a village in Dhading district that was decimated by a powerful April 25 quake, on Friday. Photo: Rajesh Gurung/ THT
JIWANPUR (DHADING), May 1 Ganesh Mudbhari, a resident of Jiwanpur village development committee, in Dhading district, lost his wife to Saturday’s 7.6-Richter earthquake. Since then he has cremated her body, but has not been able to mourn her death due to lack of proper space. Hindus generally mourn family member’s death for 13 days, during which they sleep and cook on their own in a separate area. “I’m planning to start this ritual tomorrow — the eighth day — but I don’t know whether I’d be able to, as my house has collapsed and we have barely managed to build a shelter to sleep,” 50-something Mudbhari said. This is the same with others who have lost family members in the village, where 46 succumbed to the devastating earthquake. Jiwanpur village, located at a distance of around 25 km from Sitapaila, in Kathmandu, is made up of around 1,900 households. Almost all of these houses have collapsed, leaving over 7,000 people homeless. Yet no one has come to the aid of the people here. Most of the bodies trapped under the debris here were pulled out by residents themselves. “Few army men had arrived here soon after the disaster. They even pulled out corpses from debris of few houses,” said Ram Kumar Mijar, a local, who earns a living by working in fields of others. This had lightened a flame of hope among residents here. “This made us think the state was with us in the time of sorrow,” said Mijar. But the flame doused after the army personnel said they had ‘other tasks to do’ and left. “They never came back,” said Mijar. Now, the residents here see a silver lining whenever helicopters roar in the sky. They think these helicopters are coming to rescue them. But the hope turns into frustration, whenever the choppers make a turn and disappear into horizon. “It appears we will never get relief materials,” said Mudbhari’s brother Rameshwor, as his words trailed off in deepened despair. So far, all these people have received in the name of aid is tarpaulin. They were distributed by the VDC secretary, exclusively for families who lost members. Others are living in sheds made up of corrugated sheets collected from debris of their houses. Yesterday, these people also came to know that around 70 sacks of potatoes were distributed by a vegetable wholesaler from Kalimati. “But by the time we got the information, the food had vanished,” said Mudbhari. Because of incidents like these, coupled with state’s apathy, the level of frustration among people here is growing day by day. “We do not have any food left and the stock at local stores has also vanished,” said Mijar, a father of five children, in a hardened tone. “If this goes on like this, I won’t be able to feed anything to my family from tomorrow, except water.” Currently, many people like Mijar and Mudbhari have been relying on Raju Regmi, who runs a grocery store, for food. “I pulled out around 30-40 sacks of rice from the debris of my shop. I then gave a sack of rice each to a group of three families on credit,” said Regmi, also a primary school teacher. “But since many residents here work on daily wage basis, and since there is no work available at the moment, they have not been able to return the money. So, I don’t have enough money to get additional supplies.” The situation is almost the same at another VDC called Kewalpur, located at a distance of around three kilometres from Jiwanpur. Though death toll stands at one, over 90 per cent of around 1,200 houses there have become uninhabitable and people are desperately in need of proper shelter and food. “At times like these shouldn’t political parties mobilise their cadres to get update on our status? If they can reach out to isolated places during election campaigns, can’t they perform a similar operation now?” asked Regmi’s wife Rita, adding, “We are not asking for much. All we want is a tent to sleep in and some food materials.”
#April 25 earthquake #political parties #corrugated sheets #debris #quake survivors #quake victims #mourning #lost family #election campaigns
You May Also like: