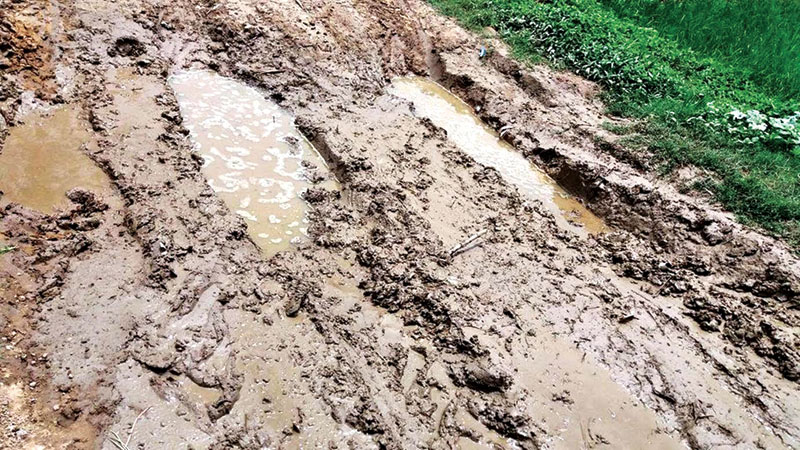 A dilapidated road filled with rainwater on the Sukadev Chowk-Gangapipara road stretch, in Rautahat, on Wednesday, August 17, 2016. Photo: THT
Rautahat, August 17 Rautahat locals have compelled to travel on slushy roads after the ditches filled with rainwater appeared in dozens of places from Sukadev Chowk to Gangapipara in the district. The locals of Constituency No 1 of the district are unable to reach their destinations to get their works done on time due to the state of the road. Two and four-wheelers have difficulty plying the road that has been filled with ditches in many places following the onset of the monsoon season. A local, Ajaya Jha, said sometimes pedestrians even fall into the ditches. “It is one of the most busy roads and its condition is worsening by the day due to incessant rainfall,” he added. The locals at Matsari, Gangapipara, Bhalohiya, Piparajabada, Laukaha and Gado VDCs of Rautahat and Khairawa, Inaurwa and Chhatauna, among other VDCs of Sarlahi use the same road section. Locals accused the concerned authority of paying no heed to their plight. Ram Shrestha Yadav of Bhediyahi said he has to use the same road to reach his office at Gangapipara-based Ayurvedic Aushadhalaya every day. “I have been facing problems reaching my office and while returning due to the dilapidated road,” he added. Yadav said that the concerned authority had turned a deaf ear though the locals frequently requested it to repair the roads. “Many bike riders fall into the ditches and have been injured,” he informed. Meanwhile, a staff at District Development Committee, Rautahat, Baiju Thakur, said his office had deployed a team of technicians to study the road condition in the district. “The repair works will be carried out as per the report prepared by the team,” he informed.
#Rautahat #district development committee #Dilapidated road
You May Also like: