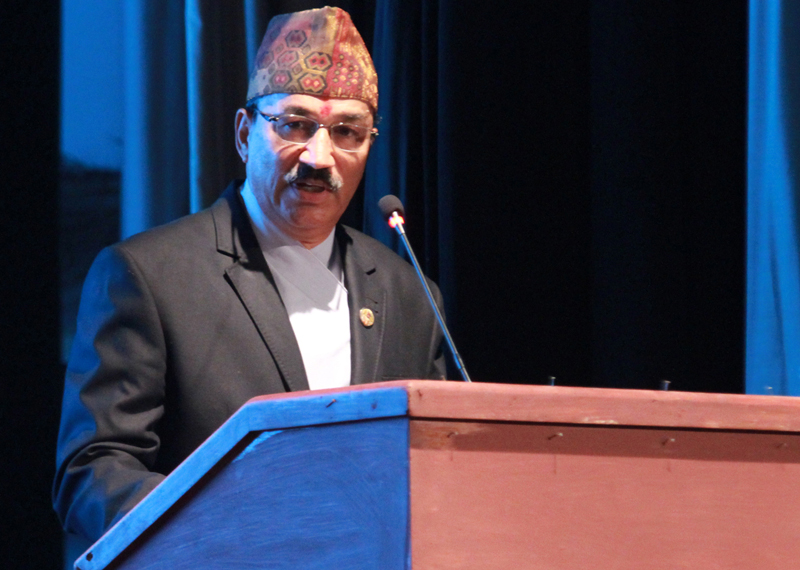 Deputy Prime Minister and Minister for Foreign Affairs Kamal Thapa addresses 7th International General Assembly and the Global Conference of the Non-Resident Nepali Association (NRNA), in Kathmandu, on Friday, October 16, 2015. Photo: RSS
WASHINGTON: Deputy Prime Minister and Minister for Foreign Affairs Kamal Thapa insisted the need of support from international community towards Nepal's bid for post-earthquake reconstruction. He made the statement during an interaction organised by Washington DC based United States Institute of Peace to mark the first year of the destructive earthquake occurred in Nepal. Addressing the interaction, DPM Thapa said the top priority of the reconstruction is to construct private houses followed by the road and bridge, schools, health posts and tourism sites. On the occasion, Thapa shared that the earthquake had killed around 9,000 people, damaged 600,000 houses and cost the damage worth $ 7 billion in Nepal. "We have lost many things but not the hope to come back", he said, pledging to complete the reconstruction of Nepal within coming five years. "We need continuous support from international community fro the same," he said. Thapa further informed that the government is making ground works to hold local body elections within coming mid-November so as to leverage the campaign of reconstruction as well. Though there are disagreements on the Constitution from my side as well but I have accepted the new national charter since it is the document of compromise, he noted. He, however, asserted that the Constitution is subjected to amendment as per the need to address the problems.
#earthquake #Nepal #reconstruction #Kamal Thapa
You May Also like: