Dr Govinda KC diagnosed with PVCs; govt sends helicopter to bring him back

Dr Govinda KC diagnosed with PVCs; govt sends helicopter to bring him back

KATHMANDU: The government has sent a helicopter to bring back Dr Govinda KC who has been diagnosed with Premature Ventricular Contractions (PVCs) while staging a hunger strike at Karnali Academy of Health Sciences (KAHS) in Jumla for the last 20 days.

After 20 days of hunger strike, Dr Govinda KC’s health has severely deteriorated. Electrocardiography recording of the last 24 hours showed multiple episodes of PVCs, which according to physician Dr Dhiraj Gurung could be life-threatening if timely intervention was not made.

“If the frequency of such PVCs keeps on increasing, Dr KC might suffer from cardiac arrhythmia and cardiac arrest anytime,” he added.

Doctors are worried as Dr KC is having ectopic beats on top of dyselectrolytemia.

In addition, Dr KC has developed infections at the site of cannula insertion. He has been complaining of severe pain and swelling at the infected site. Dr Dhiraj said, “The infection in the vein can easily spread via the bloodstream. Oxygen saturation in blood is being maintained through continuous oxygen supply. He is complaining of chest pain and fatigue.”

Minister for Education, Science and Technology Giriraj Mani Pokharel said that the chopper has been sent to Jumla this morning to bring Dr KC to Kathmandu as it has become inevitable to bring him here for his health treatment and save his life. 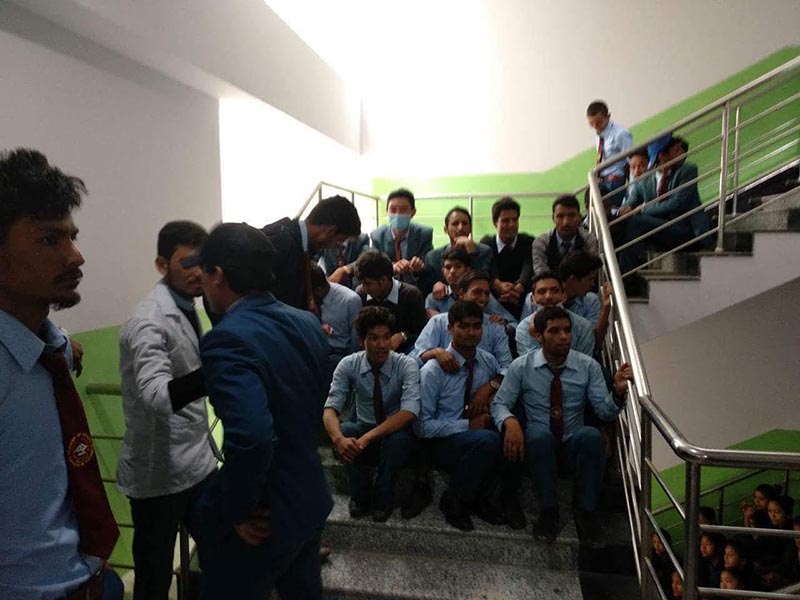 Students at Karnali Academy of Health Sciences, Jumla gather to prevent Dr Govinda KC being airlifted back to Kathmandu, on Thursday, July 19, 2018. Government has sent a helicopter to bring back Dr KC to Kathmandu. Photo courtesy: Pritam Subedi 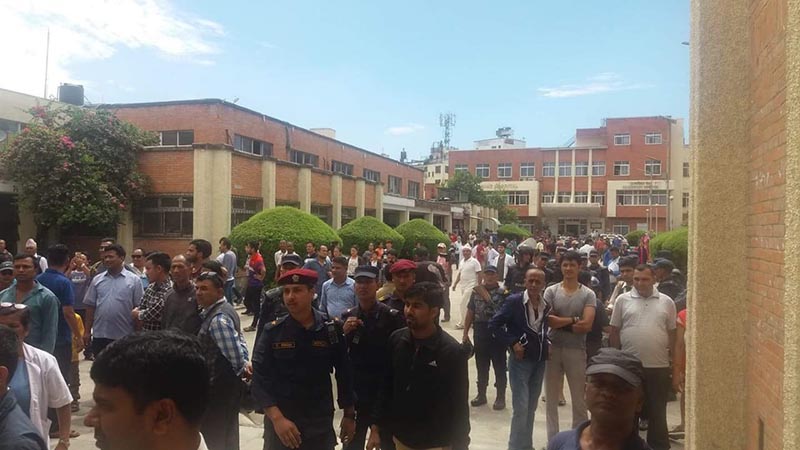 People picket Tribhuvan University Teaching Hospital during the strike called by the Nepal Medical Association, an umbrella organisation of medical doctors and dentists, in Maharajgunj, Kathmandu, on Thursday, July 19, 2018. The association has decided to halt all medical services except emergency across the country today. Photo courtesy: Sabina Khanal

Nepal Medical Association, an umbrella organisation of medical doctors and dentists has decided to halt all medical services in private and public teaching hospitals, nursing homes and clinics except emergency across the country today. The association has gone on strike to pressurise the government to take initiative to save Dr Govinda KC’s life.

Dr KC is on a hunger strike protesting the Medical Education Bill in its current form.