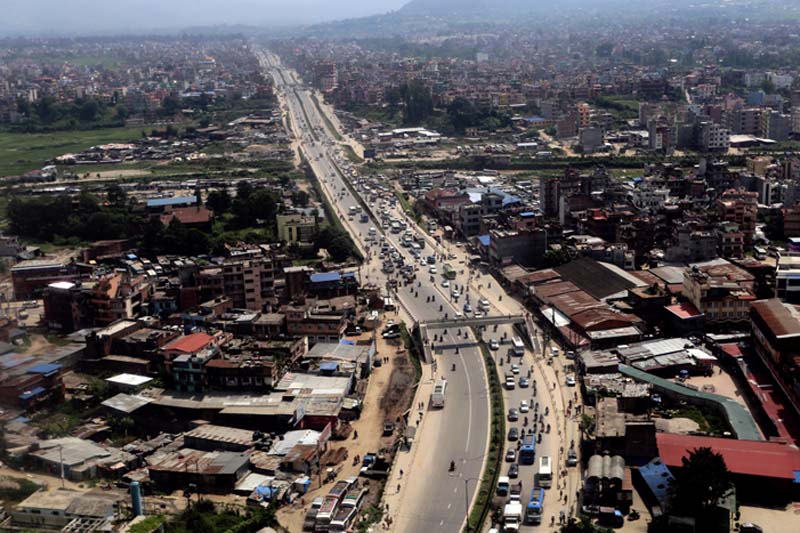 File - An aerial view of Kathmandu-Bhaktapur six-lane road along the Araniko Highway, as seen on Thursday, October 20, 2016. Photo: RSS
Kavre, February 17 As the Division Road Office, Bhaktapur has ramped up its demolition drive to clear roadside areas, the office is likely to issue a fresh ultimatum to the owners of illegally built structures along the Araniko Highway. As per an estimate, around 2,000 houses built by encroaching on the road will be demolished from Sanga Bhanjyang to Bandeu of Dolalghat. The ultimatum is scheduled to be issued at a meeting due on Sunday. Earlier, the Division Road Office had started its demolition drive by removing illegal structures in Dolalghat and Khawa in the first phase. In the second phase, which is currently under way, the office has started pulling down illegal structures in Panchkhal’s Tinpiple. According to engineer Sudarshan Karki at the Division Road Office, around 40 houses have been pulled down from Dhulikhel to Tinpiple. “Though as many as 40 houses were damaged, we haven’t completely demolished the structures after landlords demanded that they be given a month’s time to shift their belongings,” the engineer informed. As per the plan, the Division Road Office will complete blacktopping of four km road stretch and upgrade the dangerous road bends up to Panchkhal by the end of the current fiscal. Meanwhile, the victims of the road widening drive have protested the government’s move. They have formed various struggle committees and are urging the Division Road Office and government to carry out the road widening drive as per the previous criteria. “We were told to leave 22.86 metres on each side of the road when the road was constructed in 2017 BS. But now after all these years, the government says that we need to vacate 25 metres area. This is not fair,” said a victim, adding that the government should not unilaterally change the criteria as it can lead to displacement of hundreds of people.
#Araniko Highway #Bhaktapur #Bhaktapur Division Road Office #Illegally constructions
You May Also like: