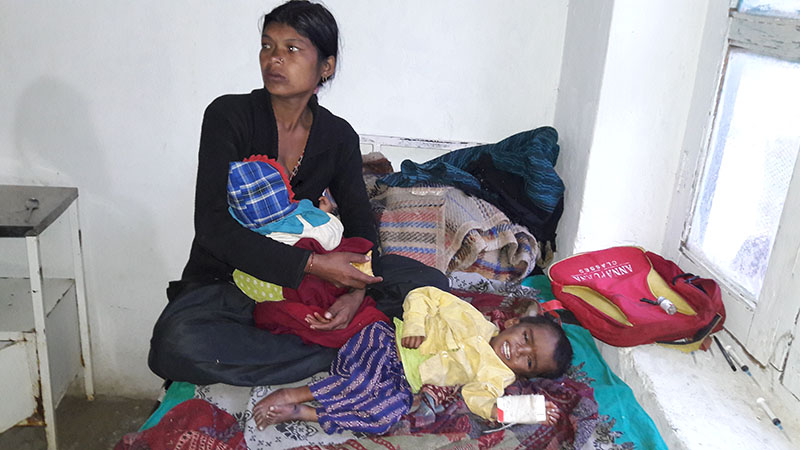 A woman sitting on a bed as her child, who is suffering from malnutrition sleeps, in Budhinanda Municipality, Bajura, on Thursday, March 15, 2018. Photo: Prakash Singh
BAJURA: Samita Rokaya of Himali Rural Municipality-3 in Bajura district leaves dry bread and stale rice for her four children before going out to work in the field. Her daily routine is to work in the field from dawn till dusk, but there is still a scarcity of food. People in Seti and Karnali have been living in conditions of abject poverty as the regions have been hit hard by drought for four years. It has been difficult for people to save the food grains due to widespread famine in the area. As a result, children and women have been suffering from acute malnutrition. People in the far-western and mid-western districts including Bajura, Bajhang, Humla, Mugu, Kalikot, and Jumla have been suffering from malnutrition, said Dr Satya Shahi at Kolti Primary Health Centre. He shared that people in remote areas of Seti and Karnali have been facing famine that has resulted in widespread malnutrition. Nutritious food is far from people's reach, when they don't even have enough food to survive on. The doctor asserted that malnutrition became prevalent as people fed only on rice and gram granted by the government, without any vegetables. He further added that malnutrition could also plague people who have plenty of food until they change their dietary habits to eating healthy and nutritious food. The famine has hit so hard that Maina Rokaya of Bichchhyan in Himali Rural Municipality-1 has been having one meal a day for a month. The local health post said, she has been suffering from malnutrition and her health has been deteriorating. Likewise, another local Mana Rokaya, who gave birth to a baby two weeks ago, has not had a full meal for a month now. She has expressed her bitter experience that she takes one-course meal of rice or dry bread with salt brought from Kolti Food Corporation in Bajura. "Far from nutritious food, the pregnant women as well as lactating mothers do not even get enough food, as a result, they face problems while giving birth to babies, shared auxiliary health worker Devi Lal Sunar at Maila Health Post in Humla. The babies are born weaker to malnourished mothers, moreover, the newly born babies do not get enough milk since the women cannot lactate sufficiently for them, auxiliary nurse midwife Belsari Budha at Raya Health Post said. The health workers have pointed widespread malnutrition as the worst effects of drought and famine.
#Nepal #Bajura #poverty #drought #malnutrition #Famine #Himali Rural Municipality
You May Also like: