KATHMANDU: With military personnel from 28 countries, Exercise Shanti Prayas III, a multinational military exercise hosted by Nepal Army and United States Pacific Command, kicked off at the Nepal Army's Birendra Peace Operations Training Centre (BPOTC) in Panchkhal on Monday. Prime Minister Pushpa Kamal Dahal inaugurated the 15-day event, which aims at enhancing peacekeeping capabilities of the army personnel from countries that send troops for the peacekeeping missions worldwide under the United Nations, amid a function at Panchkhal today. In his inaugural speech, the Nepali Prime Minister mentioned that Nepal’s foreign policy is based on the principles of the UN Charter, non-alignment, principles of Panchsheel and promotion of regional cooperation through South Asian Association for Regional Co-operation (SAARC). 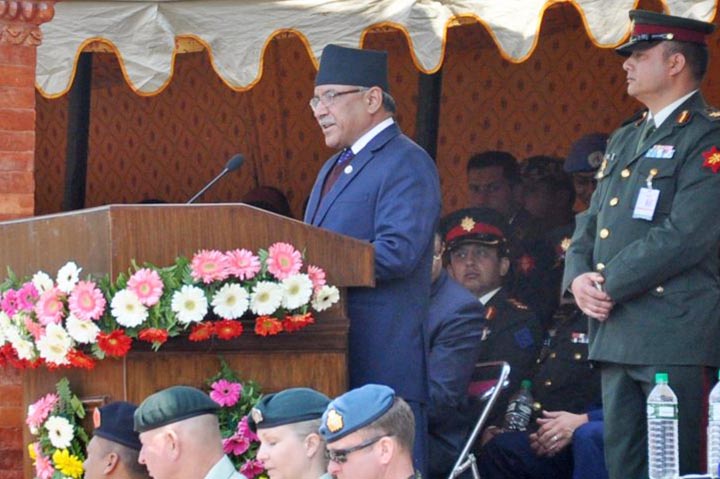 Prime Minister Pushpa Kamal Dahal inaugurates the Exercise Shanti Prayas III at Panchkhal. Photo: PM's Secretariat
Acknowledging the fact that promotion of international peace and security are issues of paramount importance for the United Nations, he said, Nepal has been consistently supporting the UN efforts in the maintenance of international peace and security through continuous participation in the UN Peacekeeping missions. "At this time, humanity is so much in need of peace, but we have a long way to go to achieve this," the former Maoist guerrilla leader said, "The world has faith on the soldiers with blue helmets. The UN peacekeepers are the vanguard and one of the key tools of the international community to restore peace and security in the conflict-torn areas." "In the midst of challenges, their dedication and devotion with professionalism, honesty and impartiality have made them beacon of the global peace. This is a moment that we solemnly remember those brave and self-less peacekeepers who have sacrificed their lives for the cause of world peace." Protection of civilians remains the article of faith to the Nepali peacekeepers, he stated. "Nepal has recently endorsed the Kigali principles in its entirety and we have unfailing commitment to the relevant UN Security Council resolutions. Principles incorporated in those documents are ingrained as core components of the training and development of our peacekeepers."