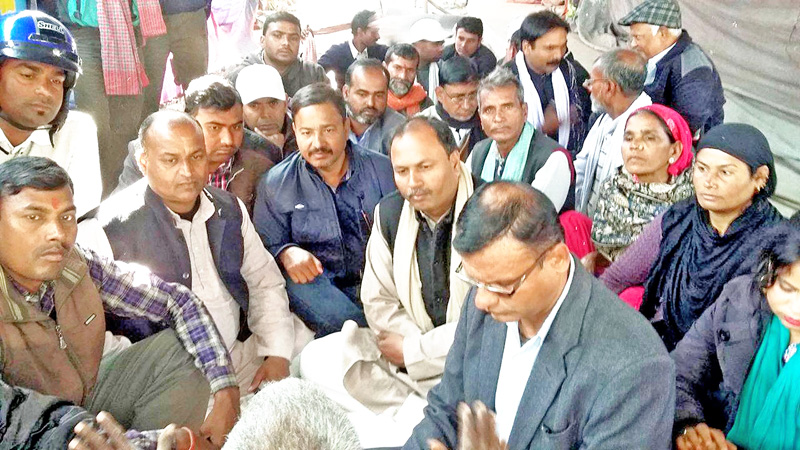 Nepal Sadhawana Party Chairperson Anil Kumar Jha along with other party cadres stages a demonstration at the Miteri Bridge on the Indo-Nepal border on Monday, December 28, 2015. Photo: Ram Sarraf
KATHMANDU: Federal Inclusive Madhesi Alliance (FIMA) on Sunday criticised United Democratic Madhesi Front (UDMF) saying the Madhes agitation has been affected for the time being due to the latter's arrogance, narrow-mindedness and shortsightedness. FIMA commented after the UDMF decided to end the border blockade and general shutdown in Tarai. Issuing a statement, Anil Jha of Nepal Sadbhawana Party, Raj Kishor Yadav of Madhesi Janaadhikar Forum-Republican, Devesh Jha of Tarai Madhesh Rastriya Abhiyan and Keshav Jha of Tarai Madhesh Sadbhawana Party said the agitation, however, will continue. "From the very beginning of the agitation, we were making efforts to form a great alliance, and  FIMA's recent meeting held in Birgunj on January 30-31 had formally decided to opt for the Mahagathabandhan," the statement said. "But till date, the Front has not been able to give up its arrogance and take decision in this regard. Instead, the Front itself seems to be divided." Pointing out the need for unity among all sides agitating in Madhes, FIMA said it will stage a candle rally in all districts in Madhes on Thursday, and hold an interaction on the agitation in different places including the Capital on February 15. Other programmes will be finalised in FIMA's meeting scheduled in Kathmandu for February 15-16, FIMA said.
#Nepal Sadbhawana Party Chairman Anil Kumar Jha #Tarai-Madhes agitation #Federal Inclusive Madhesi Alliance (FIMA) #United Democratic Madhesi Front (UCMF)
You May Also like: