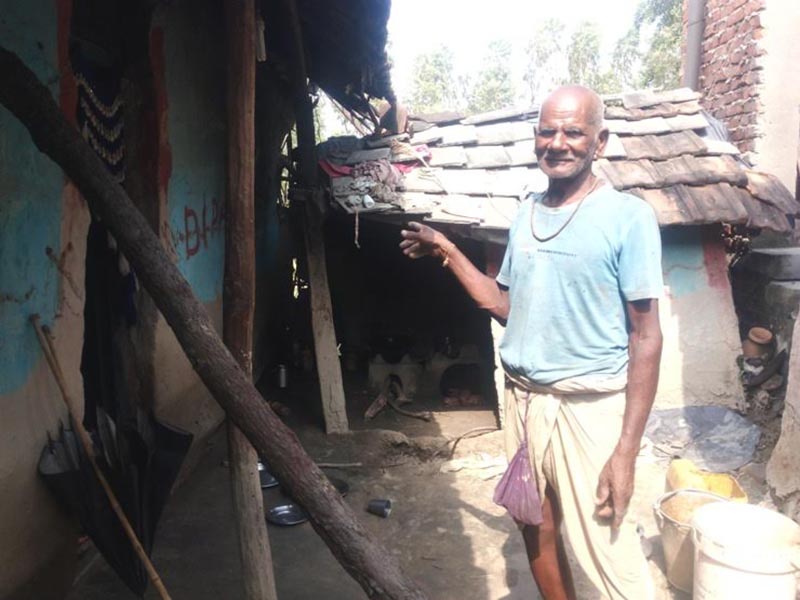 A local Bharosi Mandal showing his flood-battered house, in Siraha, on Friday, September 1, 2017. Photo: THT
Siraha, September 1 Although the third phase of civic polls is just around the corner, people in the flood-affected areas of Siraha are busy patching up their mud houses. “First comes home, where we have to live, the rest are secondary,” said Phuleshwori Mandal, 55, of Kalyanpur Municipality-3, Parsahi. “Our homes are too damp to live in and yet to be put back in order. There is no way we can think of election,” said Phuleshwori Mandal, 55, according to whom, not a single leader has approached them seeking votes so far. “They haven’t come and it’s good that they haven’t. How can they come to us asking for votes after turning their backs on us when we were battling floods?” asked a visibly angry Mandal. Another victim Bharosi Mandal, 65, said he was more concerned about reconstructing his house. “Dashain is just around the corner, and this is the condition of my house. Perhaps, if I take part in elections, I will vote for the party or the leader who helps reconstructing my house,” he said.
#flood affected areas #third phase of civic polls #Siraha flood victims
You May Also like: