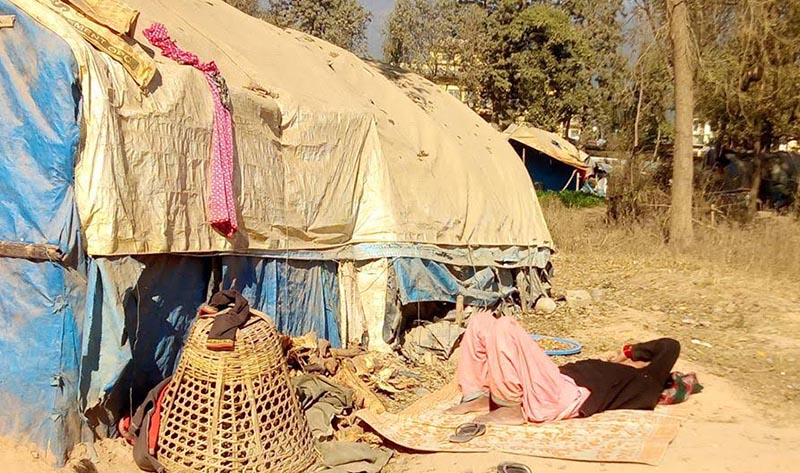 A flood victim sleeping outside a make-shift tent, in Birendranagar, Surkhet, on Wednesday, April 11, 2019. Photo: THT
Surkhet, April 10 Thousands of flood victims in Surkhet and other districts of Karnali Province, who were rendered homeless by floods four years ago, are likely to get relief, finally. A decision to this effect was taken by the cabinet of the provincial government today. “As per the decision, flood victims’ families will receive Rs 300,000 each,” said Spokesperson for Karnali government and Minister of Land Management, Agriculture and Cooperatives Bimala KC. According to the minister, only those officially identified as the victims will be entitled to the relief. It is important to note that the provincial government has so far identified 1,045 flood victims in Surkhet, while such victims in other districts are yet to be officially verified. “As the relief is for building houses, those who have their own land will receive the relief in cash so that they can build houses. The government will build houses for those who do not own land,” according to Spokesperson KC. Floods in the year 2014 had killed total 115 persons and displaced thousands of families in Surkhet. The displaced families have so far been staying in temporary tents in Chhinchu and Birendranagar areas.
#flood victims #Karnali province #Surkhet flood victims #Surkhet flood victim
You May Also like: