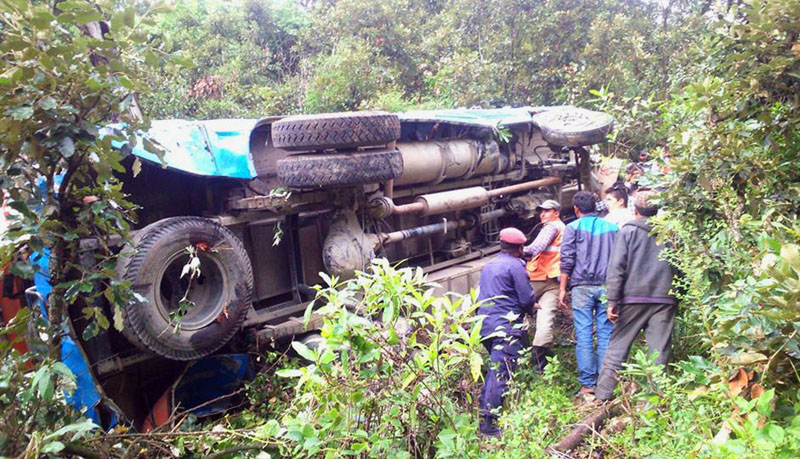 Wreckage of a bus that fell off a cliff near Brindaban in Sidhheshwar-3 of Baitadi district on Monday, August 15, 2016. Four persons died in the incident while 36 are injured. Photo: RSS
DADELDHURA: At least four persons were killed in a bus accident in Siddheshwor-3 of Baitadi district on Monday afternoon. Inspector Surendra Bam at the Baitadi District Police Office said all the four bodies were recovered from inside the ill-fated bus. The death toll may rise as rescue works are underway, according to him. Other 14 passengers have sustained injuries. The bus (Na 5 Kha 2832) en route to Bajhang from Dhangadhi of Kailali had skidded around 500 metres down the road at Brindaban, Siddheshwor-3 along the Jaya Prithvi Highway. The incident occurred at around 3:30 pm today. The injured are being taken to Dadheldhura Sub-Regional Hospital for treatment. Police suspected that the bus might have fallen the road as the road without black-topping or gravel caved in due to continuous rain. READ ALSO:
#bus accident #Nepal bus accident #Baitadi district #Baitadi road accident #Baitadi accident
You May Also like: