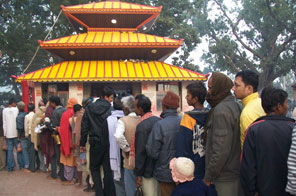 BARA: Thousands of goats and chickens were sacrificed in Gadhimai Mela on Wednesday, the second and last day of the mass animal sacrifices. Hundreds of devotees from Nepal and India made the sacrifices to appease the local deity. It is estimated that more than 20,000 goats and thousands of chickens and ducks were sacrificed today.
The devotees, with a belief that their wishes will be fulfilled, started the rituals with the break of dawn. A huge crowd of local devotees had arrived at the Gadhimai Temple early in the morning to offer the sacrifices. Since many of them could not reach nearby the temple due to the crowd, they made the sacrifices as far as two kilometres away as well. Nearby fields and banks of the local Pasaha Khola were filled with the sacrificed animals' body parts. The entire area, including the temple premises, was covered in the pool of blood today.
Following the panchabali — sacrifice of five different animals — mouse, hen, pig, goat and buffalo, by the head priest on Tuesday morning, the devotees continued the ritual sacrificing nearly 20,000 buffaloes on Tuesday. Shiva Chandra Kushwaha, coordinator of the Mela Committee, said that the programme of sacrifice was concluded from today. He also added that though the sacrifices were concluded, the fair would continue till two more weeks. Referring to the traditional practices, he further added that the devotees who could not sacrifice the animals in the fair could sacrifice on Maghe Sankranti day as well. Though the rituals of sacrifices are over, the influx of the devotees has not yet decreased.

BARIYAPUR: A foul smell has emanated in the temple area from of the carcasses of the sacrificed animals on Wednesday after people belonging to Dalit community obstructed the removal of the same.
The Dalits resorted to the action protesting the Mela Committee's contract for the removal of the carcass. The Dalits from the villages of Bara and Parsa districts had gheraoed the slaughtering area obstructing the removal of the carcass claiming that the animals were offered to the deity as prasad and they should not be traded in contract. They demanded either to let them take the carcasses away or bury them in the temple area.
Subsequently, Raja Ram Sah, the authorised contractor, is yet to remove the carcasses from the temple area.
The 50 vehicles brought to the area to carry the dead animals away returned unloaded. This year the Mela Committee introduced the provision of the contract for selling the carcass of buffalo at Rs 510 each. With this, the committee aims at earning more than Rs 20 million.

#goats #chickens sacrificed on Day 2
You May Also like: