The government today nominated 21 ambassadors to head Nepal’s diplomatic missions across the world.

At least 22 diplomatic outposts were either headless or the terms of ambassadors leading them were about to end.

With no parliamentary hearing committee in place it will take some more time for the nominated ambassadors to assume office. 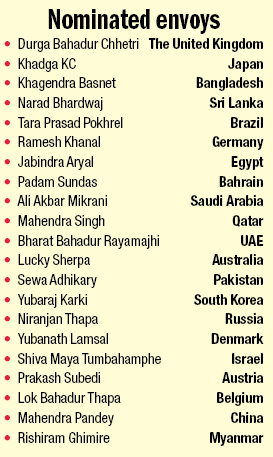 Earlier, the Nepali Congress-led coalition government had appointed Arjun Karki as Nepal’s ambassador to the USA and Dip Kumar Upadhyay to India.

Due to the rift among the parties on nomination of the ambassadors, the diplomatic positions were lying vacant for several years. The post of diplomatic head for Oman is still lying vacant.

The nominees will have to undergo a parliamentary hearing before the Minister of Foreign Affairs sends their names to the countries concerned for an agreemo.

The President will formally appoint the ambassadors as soon as their agreemo arrives.