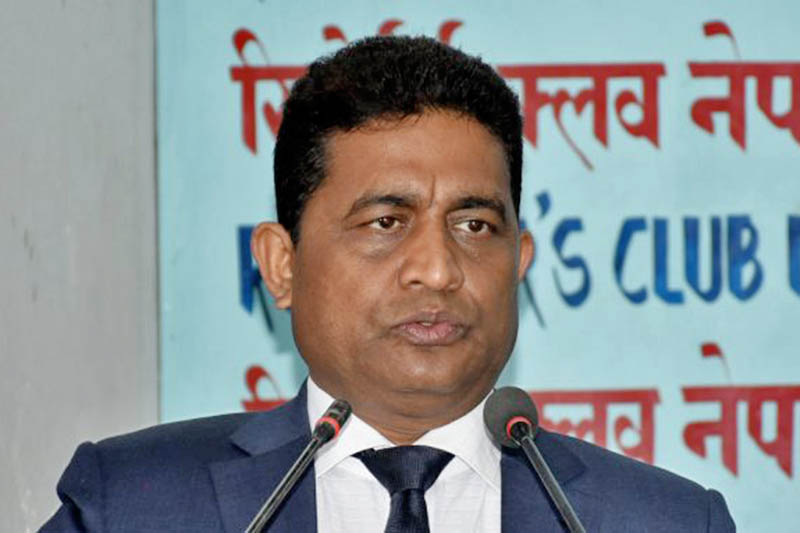 Minister for Physical Infrastructure and Transport Raghubir Mahaseth speaking at an interaction programme in Kathmandu, on Monday, April 23, 2018. Courtesy: Reporters Club
KATHMANDU: After scrapping bus syndicate, Minister for Physical Infrastructure and Transport Raghubir Mahaseth has reiterated that government is all set to scrap mini-bus and taxi syndicate in upcoming days in the country. Speaking at an interaction programme in Kathmandu on Monday, Mahaseth said, "More then 18 years ago Supreme Court had ordered to scrap syndicate in the nation. Earlier, the governments had failed to implement it. However, this time around we have implemented it. We have already scrapped bus syndicate, now, it's time to scrap mini-bus and taxi syndicate. We will manage them under company act." He also clarified that tourists and commoners would be able to travel in high-tech buses and government was working accordingly for the same. "It's our effort against immoral and unethical practices. We will obviously succeed in our mission. Eventually, the bus entrepreneurs will withdraw their protest and support the government in this effort," Minister Mahaseth shared. "After scrapping syndicate system, we have allotted a deadline till fiscal end to entrepreneurs to renew their route permit under the Company Act. We know it requires time to register under the Act," UML leader Mahaseth informed. He also warned that if the entrepreneurs fail to register under the Company Act within three months, the government would be compelled to seek other options. "Government is not going to operate transportation on its own. If the entrepreneurs fail to withdraw their protest then the government would be compelled to think of alternative ways. If required the government would not back off from running transportation in the country," Minister Mahaseth asserted. It's a win-win situation for the entrepreneurs, "As per the Company Act, employees' employment will be ensured, employment for drivers and assistant drivers will also be assured. Syndicate is actually benefiting artificial owners." He also said, after successfully bringing the entrepreneurs under the Company Act, the government is preparing to manage dress code for drivers, separate seats for senior citizens and women.
#syndicate #transport syndicate #taxi syndicate #Minstry of Physical Infrastructue and Transport #Ragubir Mahaseth
You May Also like: