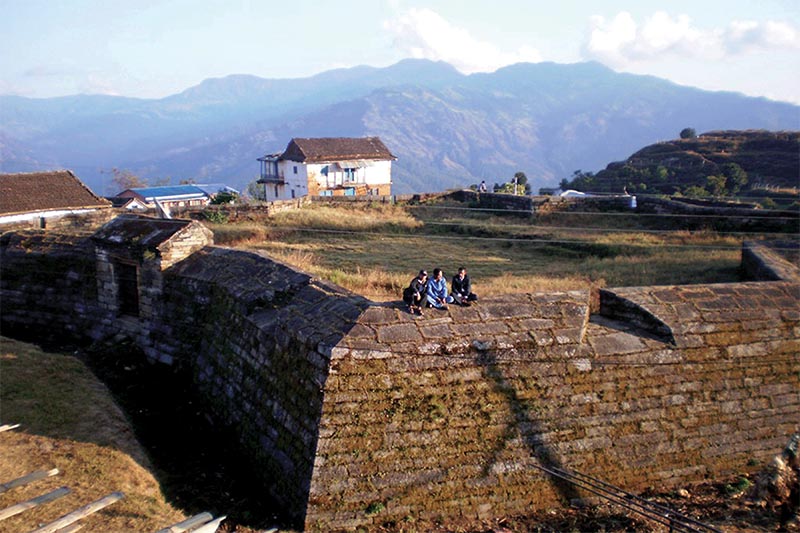 A view of the remnants of the historic Dullu palace, in Dailekh, on Friday, August 31, 2018. Photo: RSS
DAILEKH: Several historical sites of cultural and religious importance in Dailekh district are in dire need of conservation and promotion. Once a grand castle in the 18th century, the remains of ‘Dullu Durbar’ at Dullu Bazar remains in utter neglect. “The sight of the castle’s remnants, stone pillars and stone sculpture in the district will make you feel sorry,” said historian Bhupal Bikram Shah. The oldest inscription in Nepali language dating back to 1038 BS (more than a thousand years ago) is associated with Dailekh although Sinja of Jumla is the place of origin of Nepali language. Monuments like Panchadeval, Kotgadi and Mahabu Dham are also pride of this district but they need to be conserved and promoted. Idol of Jain Tirthankara Mahabir in the Paduka temple dating back to 18th century, which has religious significance, is also in need of conservation. There are also two edicts named ‘Sauna Kakri’ and ‘Sauka Kacrani’ belonging to King Ashok Challa of Sinja Kingdom. These things have added values to Pancha Koshi area, stated a local trader Narendra Thapa. Dullu Municipality has converted Pauwa Durbar (Pauwa Castle) into a cultural museum, shared Dullu Municipality Mayor Ghanashyam Bhandari.
#Dailekh #Dullu Durbar #Dullu Palace #historical sites
You May Also like: