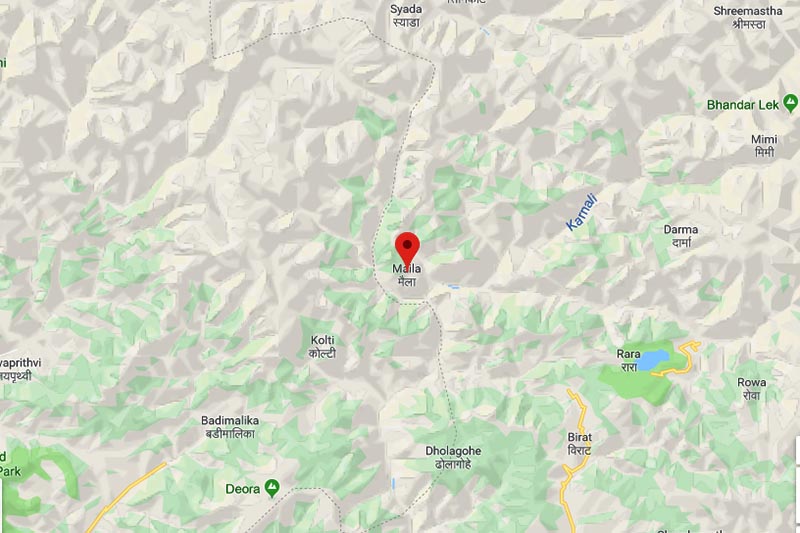 This image shows Maila area in Tanjakot Rural Municipality of Humla district. Image: Google Maps screenshot
Surkhet, April 29 The death toll from the outbreak of an unknown disease that appeared in Tanjakot Rural Municipality of Humla about three weeks ago has reached 10 with one more fatality reported today, as health authorities scramble to identity and contain the outbreak. Today, 62-year-old Pabitra Bohora of Bhadaura inTajakot succumbed to the disease. In the wake of the outbreak, two separate teams of health workers including experts from Mugu and Surkhet had reached Tajakot yesterday. While the provincial government, in coordination with the federal government, sent a team led by Dr KN Poudel with necessary medicines to the outbreak-hit village via a Nepal Army chopper, another team of health workers led by Dr Manoj Timalsina from Ratamata Primary Health Centre of Mugu reached the village yesterday on foot. While the Dr Poudel-led team has been examining patients after setting up a camp at Bhaisamajh Community Health Unit; Dr Timilsina-led team is treating patients from Maila Health Post.  The teams are said to have examined more than 200 patients since yesterday in the village. Though the doctors, on the basis of the symptoms, suspect the outbreak to be seasonal common cold and cough, they said they couldn’t say anything for sure until the test report. “We can say for sure what the cause of deaths is only after we return to Surkhet with samples of patients’ spittle and test it in the laboratory,” said leader of the team Dr KN Poudel, adding that the spittle samples would be sent to Surkhet on Tuesday and it may take three to four days for the results to arrive.
#unknown disease #Humla #Tanjakot Rural Municipality #Tajakot Rural Municipality #unknown disease outbreak
You May Also like: