Nepal’s Prime Minister KP Sharma Oli faced a fresh political challenge today as hundreds of opponents protested against his sudden move to dissolve the House of Representatives and call elections more than a year ahead of the schedule. 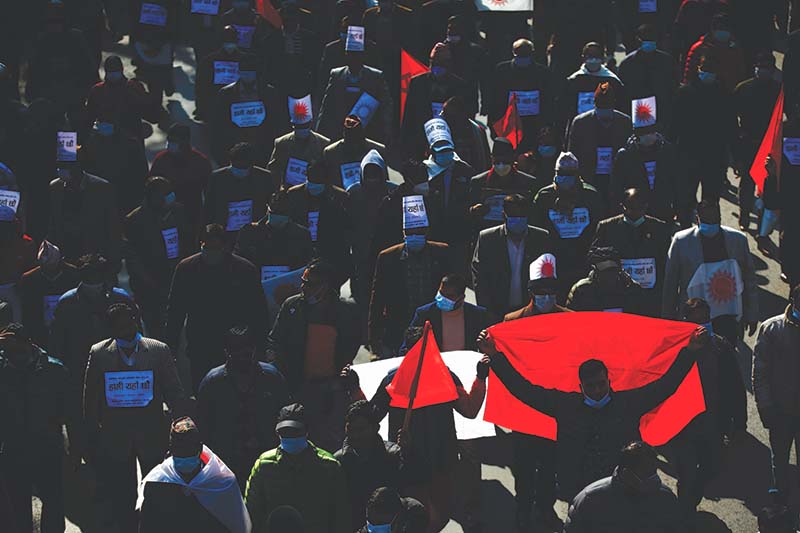 Hundreds of demonstrators led by former prime ministers Pushpa Kamal Dahal and Madhav Kumar Nepal took to the streets to protest against the dissolution of the House of Representatives, in Kathmandu, on Friday, December 25, 2020. Photo: Skanda Gautam / THT

Three former prime ministers joined hundreds of activists who sat on a road near Oli’s office demanding that the decisions announced on Sunday be reversed. Oli recent move has triggered deep political unrest in the Himalayan nation just as it grapples with the COVID-19 pandemic.

The ex-premiers said Oli had no power to dissolve the Parliament and that he had violated the constitution.

Oli has rejected their demands and vowed to press ahead with parliamentary elections next year, on April 30 and May 10. It is not uncommon for Nepali polls to take place over two days.

The prime minister has lost support within his ruling party this year, with some senior members accusing him of sidelining them in making decision and key appointments, and calling for him to step down.

Oli says internal squabbling and lack of cooperation from his party has paralysed decision-making, forcing him to seek a fresh popular mandate.

The Supreme Court is hearing more than a dozen petitions challenging Oli’s dissolution of the Parliament and calling of early elections. It has given the government until January 3 to provide reasons for the dissolution, said SC spokesman Bhadrakali Pokharel.