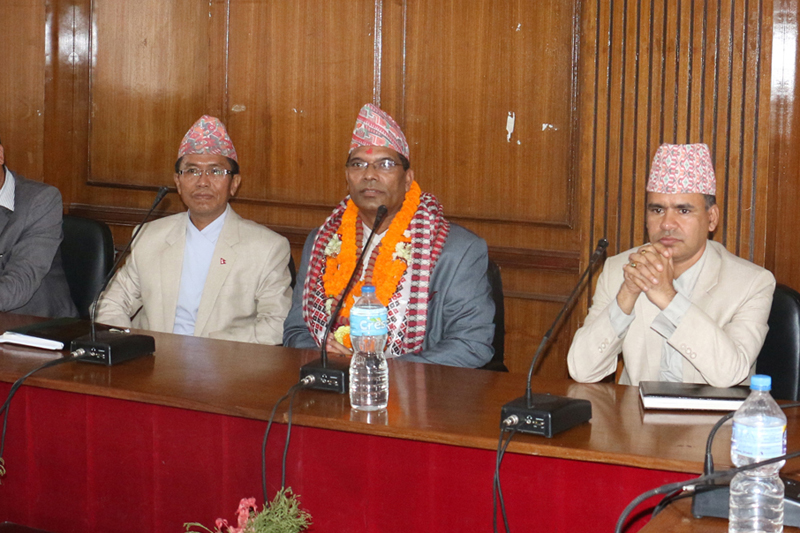 Jeevan Bahadur Shahi (centre), Minister for Culture Tourism and Civil Aviation, delivers instructions to the Ministry staff after assuming his office, in Kathmandu, on Friday, August 26, 2016. Photo: RSS
Kathmandu, August 26 Newly-appointed Minister for Culture,Tourism and Civil Aviation, Jeevan Bahadur Shahi today said he would prioritise development of infrastructure and expansion of air services to give boost tourism in the country. Issuing directives to the employees of the ministry and its subordinate bodies after assuming office in Singha Durbar today, Minister Shahi urged the employees to work in a result-oriented and transparent manner. “Tourism is our major source of income. Infrastructure development and expansion of air services should be moved ahead with special priority for the development of the tourism sector,” he said. Stating that the western and the far-western parts of the country is lagging behind in terms of tourism activities compared to the eastern regions, the newly-appointed minister said, “I am here in the ministry to work and deliver results.” He expressed his commitment to bring changes in the working style of the ministry with a clear plan of action. On the occasion, the newly-appointed minister directed the office-bearers of the bodies concerned to improve services at the Tribhuvan International Airport, the only international airport of the country. Minister Shahi directed the officials concerned to add more aircraft to the existing fleet of the national flag-carrier, the Nepal Airlines Corporation, and also to carry out works in a planned manner. At the programme, Secretary at the Ministry Prem Kumar Rai had briefed the minister on the ministry’s activities. The heads of department and staff of the bodies under the ministry welcomed the newly-appointed minister. Born in Kharpunath of Humla district in 2025 BS, Shahi was elected a Constituent Assembly member from Parbat from Humla.
#Constituent Assembly #Tribhuvan International Airport #Singha Durbar #Tourism and Civil Aviation #Minister for culture #tourism #Jeevan Bahadur Shahi
You May Also like: