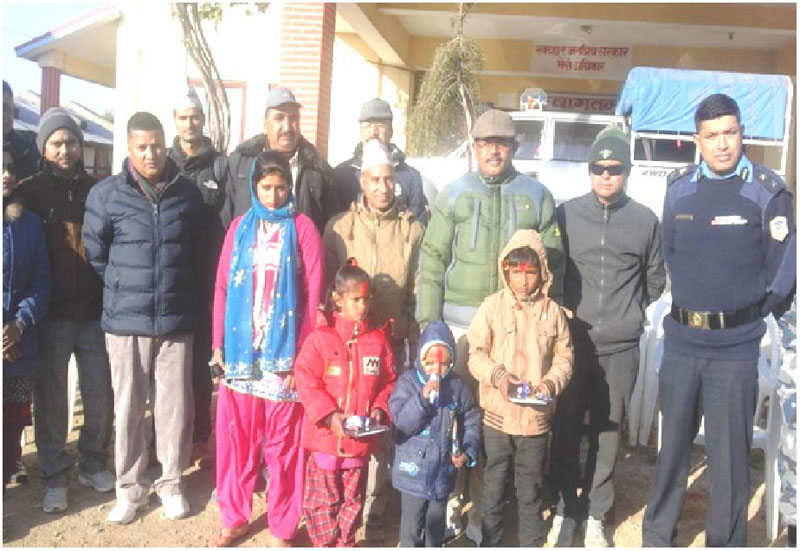 Orphaned siblings posing for a photo with Chief District Officer of Kailali, Prem Prasad Luintel (third from right), in Kailali, on Sunday. Photo: THT
Dadeldhura, January 31 Three orphaned siblings, who lost their both parents two years ago, were sent to SOS Children’s Village Nepal in Kailali at the initiative of Chief District Officer Prem Prasad Luintel. According to CDO Luintel, Dipendra Jaisi, 11, Rewati Jaisi, 9 and Nirajan Jaisi, 6, of Bagarkot VDC-5, Sirad of Dadeldhura had reached the District Administration Office with a relative a week ago. “While interrogating the children, I felt sorry for them. Hence, I took the initiative for their protection and education at the SOS Children’s Village in coordination with District Child Welfare Committee,” said CDO Luintel. Draupadi, mother of the children died of a heart disease three years ago, while their father, Jay Raj, died of kidney failure two years ago. Ever since, the orphaned siblings were earning their living by working as daily wage labourers. “My happiness knows no bounds after SOS Children’s Village took responsibility of their shelter and education. Now, we have been collecting data of orphans in all the VDCs of the district with the help of VDC secretaries,” he said. As many as 81 orphans have been taking shelter and acquiring education at the children’s village at present. Of them, above 40 per cent children are from various districts in the far-western region, said Padam Bahadur Hamal, executive director. “We take all the responsibility of the children, who come to us, until they become independent,” Hamal clarified.
#Kailali #District Child Welfare Committee #SOS Children’s Village #Three orphaned siblings
You May Also like: