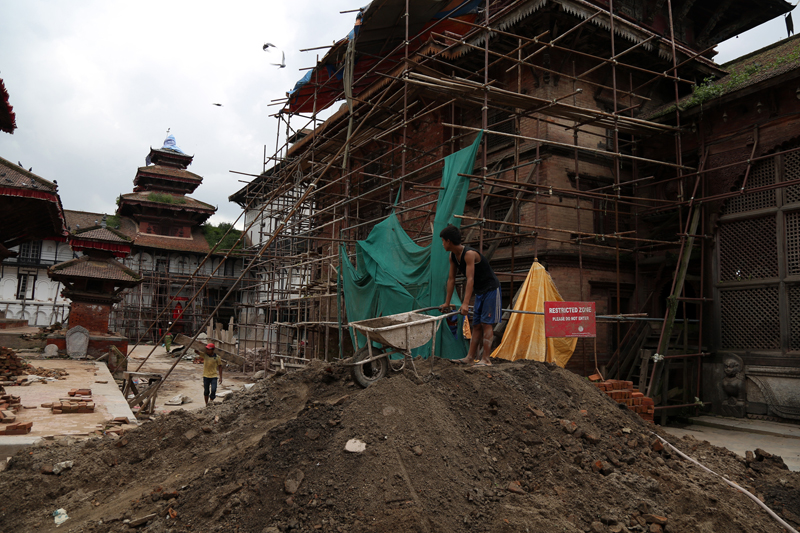 File - A monument, damaged by the 2015 earthquake, undergoes reconstruction in Basantapur Durbar Area in Kathmandu, on Friday, August 12, 2016. Photo: RSS
Kathmandu, March 24 A UNESCO mission, which arrived in Kathmandu a few days ago, is taking stock of the situation of World Heritage sites and is likely to recommend that Kathmandu Valley World Heritage Property be put in the ‘danger list’. Last year too, the mission had recommended to the UNESCO World Heritage Committee to place Kathmandu in the danger list. The committee, however, decided against it following ‘intense lobbying’. Listed for their outstanding cultural values, the world heritage property of the Kathmandu Valley comprises seven monument zones — the durbar squares or urban centres with their palaces, temples and public spaces of Kathmandu, Patan and Bhaktapur, and the religious ensembles of Swoyambhu, Bouddhanath, Pashupati and Changunarayan. With the seven monuments in the Kathmandu Valley listed as a package, all sites will be placed in the danger list even if not all of them no longer meet the set criteria, claimed an official at UNESCO, who did not want to be named. The Department of Archaeology, on the other hand, said the mission was in town for UNESCO’s regular monitoring of the heritage sites, and there was ‘no threat’ of the sites being placed in danger list. “We have been following the UNESCO Convention and fully complying with the recommendations made by UNESCO,” DoA Spokesperson Ram Bahadur Kunwar said. The final decision on whether or not to put the Kathmandu Valley World Heritage Property in the danger list, however, will be taken after the mission submits its report to UNESCO’s World Heritage Committee in July. UNESCO, meanwhile, is not happy with the pace of reconstruction in the Kathmandu Valley and the way it is being done. Seven monuments of the Kathmandu Valley made it to the list of UNESCO’s ‘cultural’ list for meeting three criteria — of bearing a unique or at least exceptional testimony to a cultural tradition or to a civilisation which is living or which has disappeared; being an outstanding example of a type of building, architectural or technological ensemble or landscape which illustrates a significant stage in human history; and being directly or tangibly associated with events or living traditions, with ideas, or with beliefs, with artistic and literary works of outstanding universal significance. For failing to meet UNESCO's recommendations and curb haphazard urbanisation, which resulted into loss of traditional houses and unique architecture for which the Kathmandu Valley was known for, though most of the monuments were in good conditions, the World Heritage Committee repeatedly recommended to put the Kathmandu Valley in the List of World Heritage in Danger since 1993. The Kathmandu Valley was listed in the danger list in 2003 for being ‘threatened by uncontrolled urban development’. The property was finally removed from the list four years later after the boundaries were redefined, buffer zones were created and management systems were put in place. The World Heritage Committee had earlier noted that all seven monument zones suffered extensive damage from the earthquakes of April and May 2015 that resulted in adverse impacts on attributes, authenticity, integrity and management of the property and put its Outstanding Universal Value at risk. The mission is visiting on the request of the government of Nepal to review the progress made since the last visit of the mission in 2016. The Department of Archaeology had submitted an updated report to the World Heritage Centre on February 1 on the state of conservation of property and the implementation of suggestions made in the previous review. READ ALSO:
#UNESCO #Kathmandu Valley #world heritage sites #Nepal heritage #Nepal culture #Nepal archaelogy #Department of Archaelogy #World Heritage Committee #List of World Heritage in Danger #Kathmandu Valley’s heritage #Kathmandu Valley World Heritage Property #World Heritage #Nepal heritage site
You May Also like: