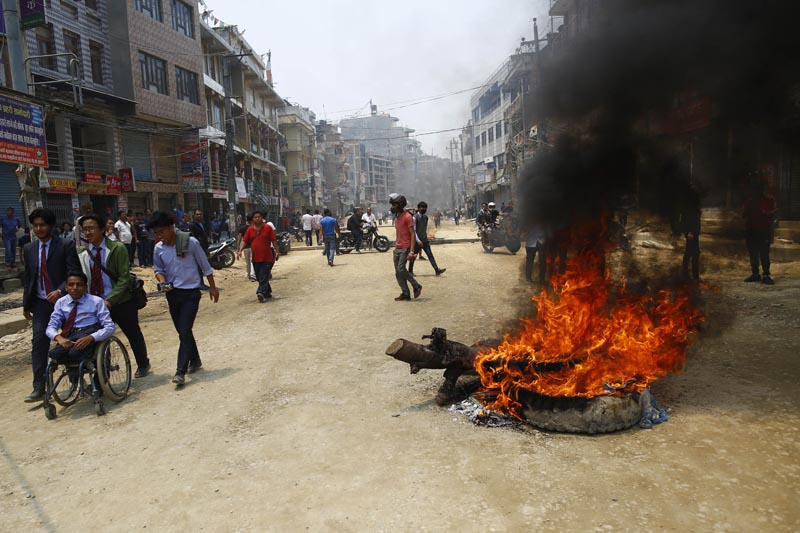 People passing by a burning tyre after local residents staged a protest against delay in black-topping the under-construction road at Bouddha in Kathmandu, on Thursday. The road expansion work started in September 2015 and was expected to be over in 18 months, but has been delayed, causing dust pollution.  Photo: Skanda Gautam / THT
Kathmandu, May 9 The pent-up frustration of people residing along dusty Chabahil-Sankhu road segment finally burst today with the public hitting the streets to protest the prolonged delay in construction of the 12.5-km road, while police used force and teargas, injuring almost a dozen protesters. Public anger had been simmering for years in the area after the authorities concerned failed to blacktop the road segment even after four years after awarding the contracts. This has compelled people to live inside the cloud of dust during the dry season and navigate through muddy and slippery road during monsoon. “We had no option but to take to the streets after the contractor and government authorities breached their commitment to blacktop the road multiple times,” said Sahadev Chaulagain, secretary of the Bouddha Trade Association, an umbrella body of around 450 traders operating businesses in the area, which led today’s protest. “This delay has cost us at least Rs 8 million as we have been hiring water tankers to sprinkle water on the road to settle the dust that enters our shops and damages goods.” The protest began at around 8:00am with traders and locals chanting anti-government slogans and demanding punishment for contractors and authorities who failed to complete the work on time. Protesters also carried placards and banners that contained slogans condemning the delay. Initially, the protest was peaceful. But the situation became tense after protesters blocked the road with boulders, utility poles and drainage pipes lying on the roadside, choking vehicular movement. Later, protesters also started burning tyres and electric wires strewn on the roadside. Finally, police arrived at the scene to clear the road. But protesters hurled stones at them. The situation became tense after police used batons and teargas to disperse the crowd. At least a dozen protesters were injured in the clash. Police also rounded up at least six protesters, who have since been released. “The road construction has been delayed as the government authorities have colluded with contractors,” claimed Naresh Katuwal, president of the National Entrepreneurs Federation of Nepal. “This inaction of two-thirds majority government has raised the level of dust pollution in the area, exposing tens of thousands of people to severe health risk,” added Katuwal. The construction of the Chabahil-Sankhu road segment formally began in September 2015 and was supposed to be completed in around two-anda-half years. But so far only 35 per cent of the work has been completed. The government has divided the project, which includes widening of the road to 22 metres, into four segments and has hired contractors to complete the work. Of the four segments, the 3.6- km segment that stretches from Chabahil to Bagmati Bridge at Jorpati is considered crucial, as it has higher population density and is home to Bouddha Stupa, a world heritage site, which attracts large number of domestic and foreign visitors. Most of those who took part in today’s protest want construction of this segment to be expedited. The government has appointed United Builders and Engineers Pvt Ltd to build this segment at a cost of Rs 424.3 million. But it has been blaming the government for the delay. “We have not been able to do our work because government agencies have not relocated the utility poles. They also need to put sewage and water pipes deeper under the ground, as they are currently closer to the surface and keep leaking whenever we start construction work,” United Builders proprietor Shakunta Lal Hirachan said. The Department of Roads is aware of hurdles in road construction, but has not taken any action. “Lack of coordination among government bodies is a major problem facing road projects,” said DoR Director General Keshab Kumar Sharma. “From now on, local levels should take ownership of such projects and look into the issue of management of water lines, sewage and cables when building, expanding or renovating roads.” READ ALSO:
#protest #Dust Pollution #Road construction delay #Chabahil-Sankhu road segment #Bouddha Trade Association
You May Also like: