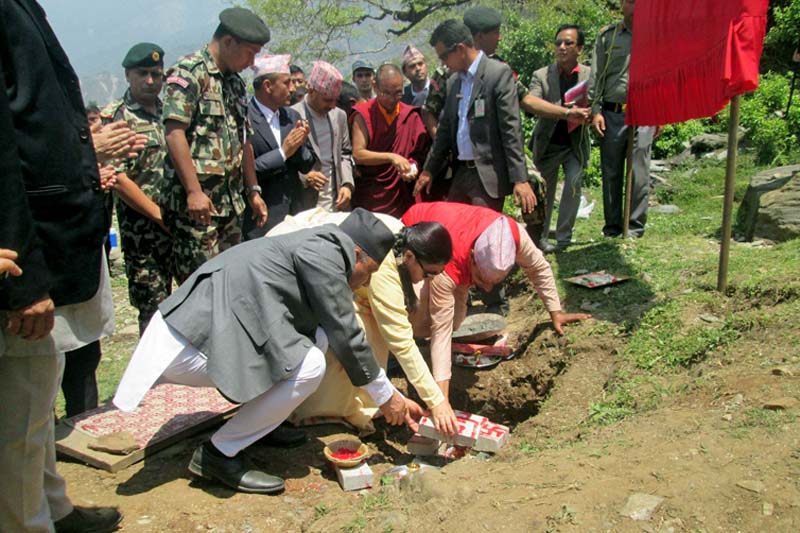 On the occasion of the first memorial of the devastating earthquake of last year, with its epicentre in Barpak, Gorkha, the government today initiated the mega-campaign for reconstruction in different quake-hit districts of the country, including Gorkha and Sindhupalchowk.

President Bidhya Devi Bhandari announced the beginning of the mega-campaign today by laying the foundation stone for Gopal BK’s house in Barpak. 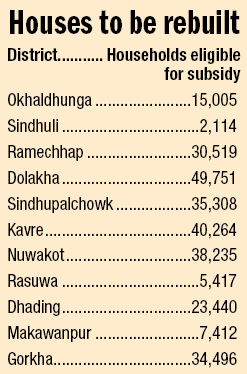 Occupying an area of 216 ropani land, the park will be constructed in the memory of people killed by the temblor. The names of all those killed will be carved in the park.

The campaign kicked off in three worst affected places of the district where foundation stones were laid for reconstruction of houses.

PM Oli also handed over agreement paper for reconstruction of the house belonging to Yadu Maya Ghorasaini, a single woman, at a special function organised in Chautara.

The PM expressed dissatisfaction with the conditions of donors for reconstruction of houses of quake victims.

The Oli-led government has been facing criticism from all quarters, besides the International Community for delaying the reconstruction process and not providing necessary subsidies to victims to reconstruct their damaged dwellings.

The PM also laid a floral wreath at the base of the ruins of Dharahara, in Kathmandu, in memory of those killed during the quake last year.

The NRA has begun publishing the names of families eligible for government subsidy for reconstruction of houses. A list of 283 VDCs were sent through the concerned DDCs.

Meanwhile the four top leaders of major parties are scheduled to inaugurate the reconstruction work of cultural heritages at a programme organised by the Ministry of Culture, Tourism and Civil Aviation in different parts of Kathmandu Valley tomorrow.