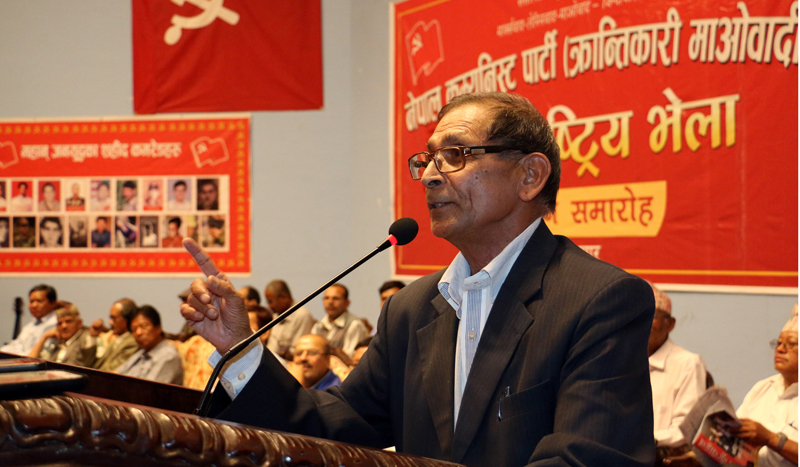 Chairman of the Communist Party of Nepal-Revolutionary Maoist, Mohan Baidya, speaking at a programme in Kathmandu on Monday, June 21, 2016. Photo: RSS
JANAKPURDHAM: CPN-Revolutionary Maoist Chairman Mohan Baidya today insisted the need for a radical change in the the Constitution. At a press conference, Baidya pointed out the fact that mere amendment and rewriting of the new Constitution would not be in the interest of the working class and Madhesi community. He added that the Madhes uprising fell short of reaching its set goal due to Madhes-centric party leaders' lust for parliamentary posts and power rather than the interest of Madhes. He urged people to stay alert towards such deceitful acts of the parties. In response to a question, Baidya ruled out any possibility of forging a working alliance with his former colleague and incumbent Prime Minister, Pushpa Kamal Dahal. Baidya further said his party was now preparing for a new uprising in the country.
#new constitution #Mohan Baidya #Nepal's constitution #constitution amendment #CPN-Revolutionary Maoist
You May Also like: