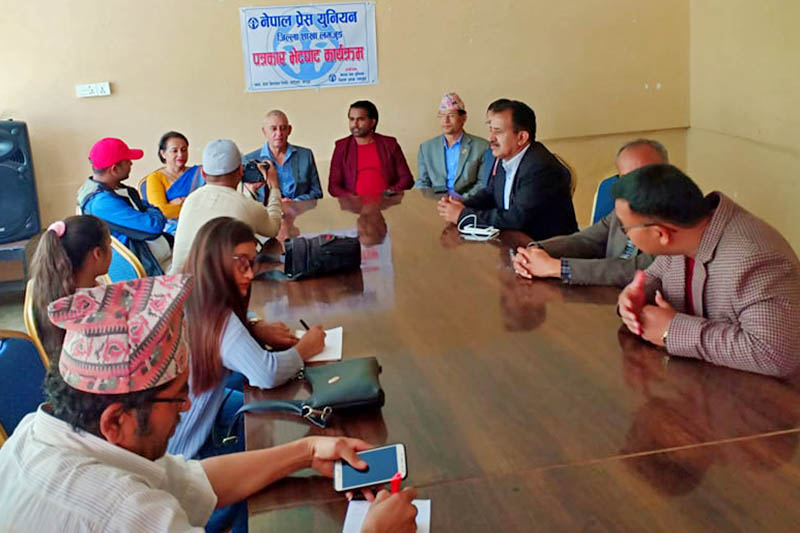 NC General Secretary Shashanka Koirala attending interaction programme organised by Press Union, Lamjung Chapter, in Besisahar on Tuesday, April 09, 2019. Photo: Ramji Rana/THT
LAMJUNG: Nepali Congress General Secretary Shashanka Koirala has asserted that the two-thirds majority government has failed completely as it is acting against the spirit of the constitution. Speaking at an interaction programme organised by the Press Union, Lamjung chapter, Koirala said the government had failed to yield any concrete results. Instead, the government is curtailing the power of provincial and local level governments, Koirala added. NC senior leader Koirala accused the government of intervening in an independent judiciary, curtailing press freedom and being against the constitution implementation. "The government is not tired of luring people with fake dreams, however, people are tired of listening to these promises," Koirala said adding that the country was in a critical state. He also echoed that Prime Minister Oli-led government had not done anything new to people; instead it was giving continuity to NC-led projects. On a different note, Koirala said that the Nepali Congress would integrate after the general convention as a party cannot function in factions. "Despite being BP Koirala's son, I am not in favour of taking the reins in my hands, I am okay with whoever will be the next chairperson of Nepali Congress," Koirala clarified. When journalists asked Koirala whether it was his view or party's agenda to reinstate a Hindu state, Koirala reiterated that one of the stars in the party's flag was religious freedom, adding that it was the party's view. "It should be religious freedom, not secularism," Koirala added. On the occasion, NC's central member Dhanraj Gurung, leader Sarita Prasai, party cadres, among others were present.
#Nepali Congress #KP Sharma Oli #BP koirala #Shashank Koirala #Dhanraj Gurung
You May Also like: