Galley: Silhouette of Bouddhanath Stupa as seen in Kathmandu!

KATHMANDU: Nepal Communist Party (NCP), Parsa, on Wednesday condemned the attack on its rural municipality committee members attending a swearing-in programme organised in Prasauni, Bindabasini Rural Municipality-5. NCP's RM committee member Mukesh Chaurasiya was killed in the attack carried out by a group with a criminal background, on October 22, the press statement issued by NCP Parsa stated. An unidentified group had attacked NCP's unanimously elected RM committee members who had gathered to take the oath of office and secrecy amid a function. The attackers tore the party's banners, flags and started beating members with bamboo sticks. The attackers also struck one of the committee members, Chaurasiya, on the head as he tried to stop them. Thereafter, NCP cadres and others present in the gathering fought back to chase the miscreants away. Critically injured Chaurasiya and others were rushed to a hospital where the former died during the course of treatment, the following day. The statement condemns Parsa district's police administration citing that the District Police Office did not register the complaint indicating the attackers. NCP Parsa has thus demanded stringent action against organisational culprits and also against the chief of Parsa's police administration. 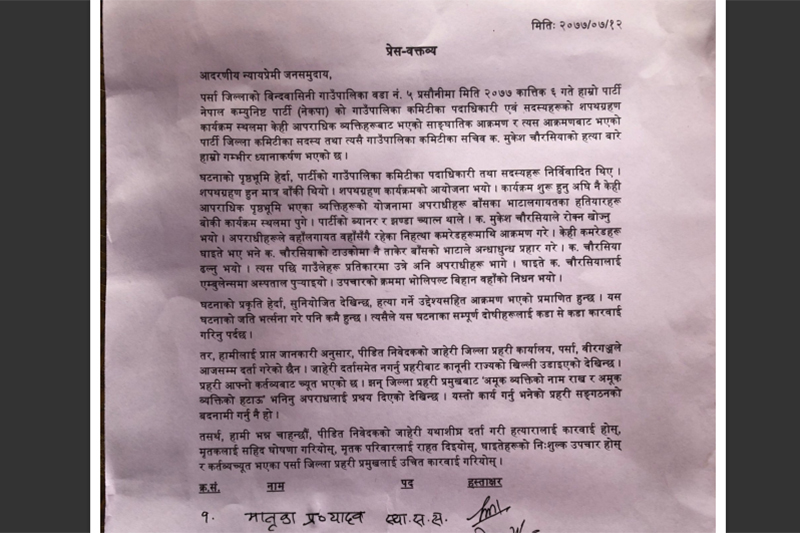