Nepal Police should be transformed in line with IT advancement: IGP Khanal 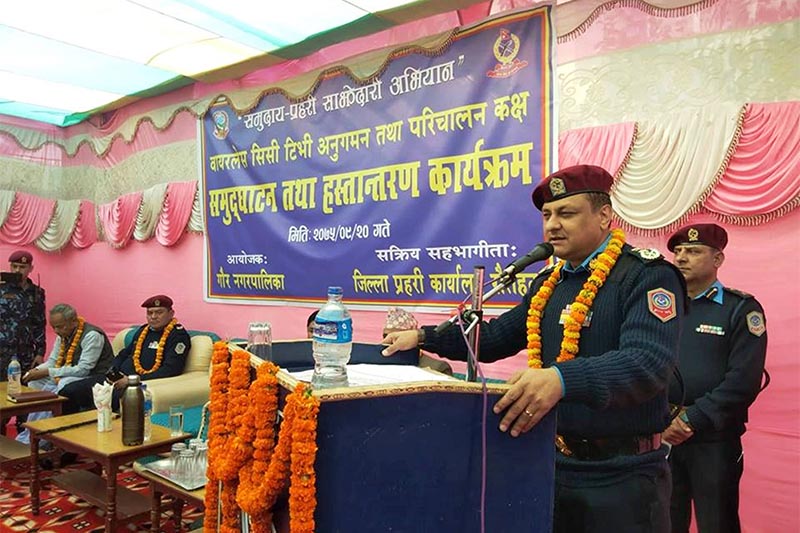 Inspector General of Nepal Police Sarbendra Khanal addresses an inaugural session of CCTV cameras installed for surveillance at District Police Office, in Gaur Municipality, Rautahat district, on Friday, January 4, 2019. Photo: Prabhat Kumar Jha/THT
RAUTAHAT: Inspector General of Nepal Police (IGP) Sarbendra Khanal has said that police in the country face difficulty in performing their duties due to lack of information technology. Addressing an inaugural session of CCTV camera in Gaur, Rautahat district headquarters today, IGP Khanal asserted that police had been facing problems in controlling crime, carrying out investigation, and maintaining law and order in lack of CCTV cameras. He expressed his belief that Nepal Police could investigate challenging cases and bring the criminals who use modern technology in committing crimes to book if police could move hand in hand with the development of technologies. Further, he stressed that technological development was necessary for the organisation, and the federal, provincial, as well as local government could play significant roles in such development. Reminding of the positive impression that Nepal Police has created in Asia and the honour given by Japanese government, IGP Khanal reiterated that the organisation must be transformed with respect to progress in information technology and the changing scenario. He added that then Nepal Police could efficiently perform its duty in minimising the crime. The head of Nepal Police assured that some personnel indulged in immoral acts were facing dismissal. On behalf of the organisation, IGP Khanal committed to doing the best in providing security to citizens and maintaining law and order in the country.

Police have started surveillance of criminal activities by installing high-technology CCTV cameras in Rautahat. The local administration has now used the technology for surveillance installing wireless CCTV cameras at 10 different places that may need monitoring. From now on, the cameras will record video of the scenes of various places from BP Chok to Customs Office including District Police Office, Hospital Chok, District Administration Office, and Bank Road. Superintendent of Police (SP) Kedar Dhakal said that this has made it easier for the police to observe activities not only of the general public but that of the security personnel as well. The CCTV cameras integrated with night vision facility installed with the financial aid of Rs 3 million from Gaur Municipality are controlled by the DPO, said SP Dhakal. On the occasion of the inaugural session of CCTV cameras, SP Dhakal and SP of Nepal Armed Police Force (APF) Battalion No. 11, Krishna Dhakal were felicitated by IG Khanal.
#Rautahat #Gaur #CCTV cameras #IT #Informnation Technology #video surveillance
You May Also like: