NC factions in bid to iron out differences 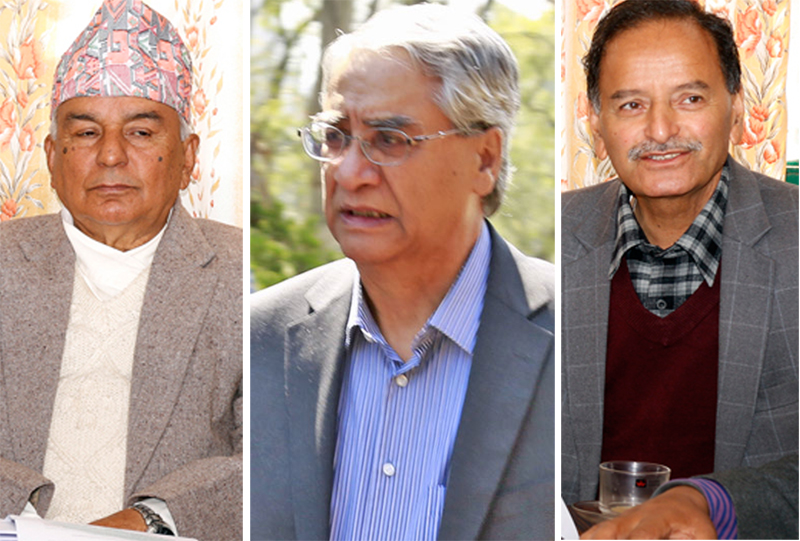 This combo image shows Nepali Congress senior leaders Ram Chandra Paudel (left) Sher Bahadur Deuba (centre) and Krishna Prasad Sitaula. Photo: THT
Kathmandu, December 14 On the eve of formal opening of the Maha Samiti meet, leaders of Nepali Congress were trying to reach a unanimous decision on the draft statute amendment. By the time this paper went to the press this evening, NC leaders were still trying to reach a consensus on issues related to preamble, number of Central Working Committee members, number of office bearers, election/nomination process of CWC members and office bearers, one-person-one-post provision and sister organisations. Leaders of the establishment faction led by NC President Sher Bahadur Deuba and rival factions led by senior leader Ramchandra Paudel and Krishna Prasad Sitaula have been trading barbs in the CWC meet being held for the past week in the run-up to Maha Samiti meet. Party insiders say a consensus will be reached even if the meeting goes past midnight, as the leaders will do their best to avoid complications related to voting in Maha Samiti. Any issue taken to Maha Samiti for decision requires two-thirds votes for approval, which in the current scenario is next to impossible, NC CWC member Pradip Paudel told THT. If no consensus is reached and the Maha Samiti is also unable to decide on the contested issues, the existing arrangement will continue, according to NC CWC member Nabindra Raj Joshi. “There are several matters to agree upon. Hopefully we will reach a consensus,” he said. In case no agreement is reached on the contentious issues, the rift between the establishment and rival camps of the party will widen further. This will further weaken the NC’s role as the main opposition party. Given that the NC has hardly ever taken disputed matters to the Maha Samiti for voting, somehow resolving them in the CWC, insiders expect the same this time around.
#Nepali Congress #Sher Bahadur Deuba #NC #Nepali Congress Central Working Committee #Nepali Congress Maha Samiti meeting
You May Also like: