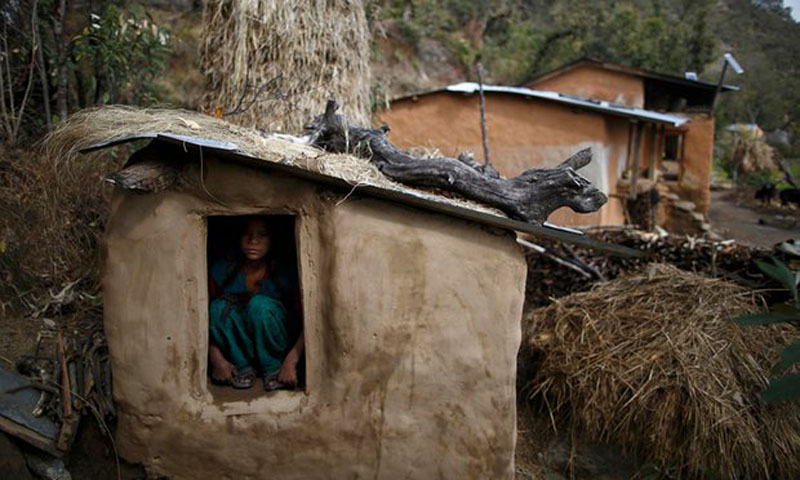 A young woman sits inside a Chhaupadi shed in the hills of Legudsen village in Achham in western Nepal. Photo: The Guardian
For five consecutive days each month, Sofalta Rokaya leaves the bed in her home in western Nepal to sleep among her family’s cows. The stone shed they share is dark and filthy, freezing in the winter and sweltering in the summer, and littered with hay, muck, insects and dung. Sofalta, 16, was terrified to tell her parents once she started menstruating. “[It] would mean staying in the cowshed, and I didn’t know if I could do it,” she says. “I feel horrible here – the cow dung smells and the animals step on us. The dirt and hay get stuck all over my body. “I wish that I didn’t have a period. Sofalta is one of thousands of girls and women in Nepal who practice Chhaupadi – banishment to a cattle shed or makeshift hut – because of so-called “impurity” during menstruation or just after childbirth. Chhaupadi dictates what a woman can eat, where she can sleep, with whom she can interact, where she can go, and whom she can touch while she is menstruating. Sofalta is not allowed to enter her house, cook, touch her parents, go to temple or school, or eat anything but salted bread or rice as long as she is in the shed. The beliefs behind Chhaupadi – which are linked to Hindu religion – decree that a woman who disobeys these diktats can bring destruction and death to her family. If she touches a crop, it wilts; if she fetches water, the well dries up; if she picks fruit, it doesn’t ripen. “If we stay in the house [instead of the shed], we get ill because our deities don’t approve of it,” explains Gita Rokaya, another woman from Sofalta’s mountainous village of Sanigaun, in the western district of Jumla. “We don’t want to live like this but our gods won’t tolerate it any other way.” Chhaupadi – which translates to “untouchable being” – has been practised for centuries in Nepal, as well as in parts of India and Bangladesh, where a yearly festival in August, Rishi Panchami, involves women purifying themselves with water and prayer for the “sins” they commit while menstruating. Although Chhaupadi was outlawed by Nepal’s supreme court in 2005, the practice is still widely observed in the western parts of the country, where low development rates, gender inequality, community tradition and high illiteracy all contribute to its continuation, say activists. According to Radha Paudel, head of the grassroots organisation Action Works Nepal (Awon), as many as 95% of girls and women in Nepal’s mid- and far-reaching western regions practise Chhaupadi, with the great majority of them banished to cowsheds. Yet Nepalese women all over the country – even Nepalese women abroad – still practise the tradition to varying degrees, she says. “In Kathmandu, land is too expensive – how could people have a cow or cowshed? But women still live separately during their period, even if the family rents only a single room.” Chhaupadi has been linked to a host of psychological and physical illnesses. Research by Awon found that 77% of girls and women felt humiliated during their periods, and two-thirds reported feeling lonely and scared when staying in cowsheds. Yet the UN also describes reports of diarrhoea, pneumonia, respiratory illnesses; danger of attack from snakes, wild animals and drunk men; incidents of abuse and rape; and high infant and maternal mortality rates, as both mother and baby are banished to the shed after birth. Laxmi Raut described how she and her newborn daughter endured freezing temperatures in a cowshed after giving birth. “She lived until the 18th day and then died after she suddenly got the flu,” she says. After losing her daughter, Raut says her views on Chhaupadi changed. She now believes women should stay in their own homes instead of being banished. Defining menstruation as intrinsically “impure” and enforcing restrictions on what women can eat, where they can go and with whom they can interact clearly amounts to gender-based discrimination, argues Paudel. She says that despite the 2005 supreme court ban, and the fact that Nepal is a signatory to the convention on the elimination of discrimination against women, there is still no government policy on eradicating Chhaupadi, nor any enforcement on the ban. “The government doesn’t consider it an issue of peace building, human rights, empowerment or development,” she says. Advertisement Changing a long-held tradition – one supported by family and community elders, and seemingly sanctioned by one’s religion – is extremely complicated, says Sandhya Chaulagain of WaterAid Nepal, which works with local partners to eradicate the practice. Slowly, NGOs and activists have been making headway on curbing Chhaupadi, through education and advocacy programmes that target men, women and traditional healers, by supporting better sanitation and menstrual hygiene practices and by using role models. Certain villages are now Chhaupadi-free zones, while others have bulldozed their Chhaupadi huts in an effort to promote greater gender equality. “It is really difficult dealing with the older people in communities that follow [these] norms – myths related to menstrual-hygiene management that have been practised from generation to generation,” says Chaulagain. “So we are focusing our programme on youth, as they are the change-makers and future elders.”
#menstruation #chhaupadi #childbirth #menstruating women #cattle sheds #cattle shed #makeshift hut
You May Also like: