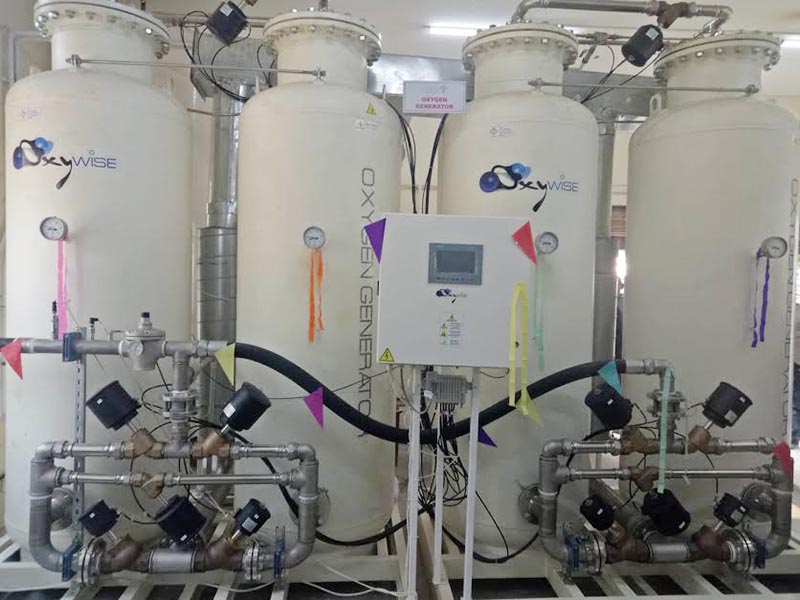 An oxygen plant that came into operation in Dharan-based BP Koirala Institute of Health Sciences, Sunsari, on Thursday, February 7, 2019. Photo: THT
Sunsari, February 7 Dharan-based BP Koirala Institute of Health Sciences has brought in operation an oxygen plant on its premises in Sunsari. BPKIHS Vice chancellor Dr Raj Kumar Rauniyar and Director Dr Gaurishankar Shah inaugurated the plant today. Biomedical engineer Pradeep Raj Shah said that the oxygen plant would produce 1,600 litres oxygen per minute, and ten cylinders could be filled in an hour. He said the plant also had buster capacity of filling 60 cylinders a day. Dr Rauniyar said the plant had made BPKIHS self-reliant in oxygen. Similarly, Director Shah said that with the new plant in operation, there was no need for the health institute for procure oxygen from outside and around Rs 60 to 70 lakh expense would be saved on a daily basis. Dr Shah added that the plant did not need any raw materials for production of oxygen. He informed the plant would produce oxygen from the air of the environment. Dr Shah informed that three technicians were deployed in the plant. “Around three crore rupees was invested to set up the plant,” he said. The health institute’s old plant has remained dysfunctional for the past six months. According to the institute, the old machine would be repaired and kept as back-up for production of the gas.
#BP Koirala Institute of Health Sciences #BPKIHS #oxygen plant
You May Also like: