One arrested with smuggled garments 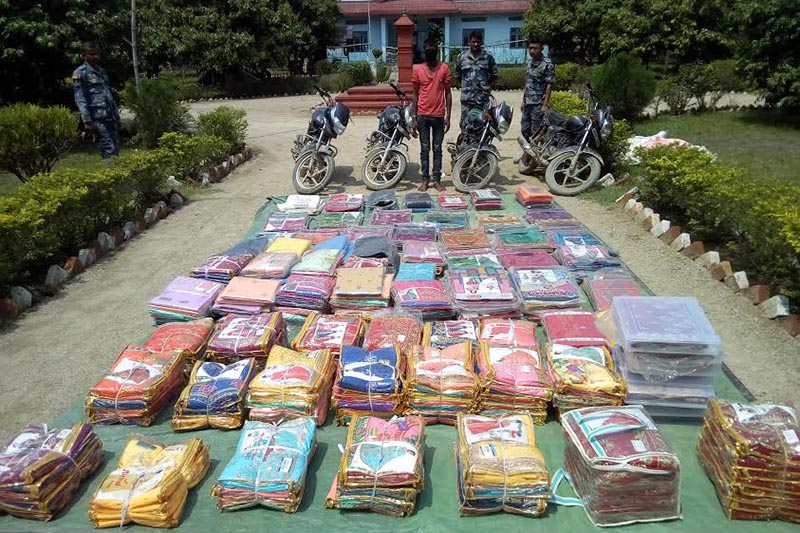 Police making public a person arrested with smuggled garments with motorcycles used to smuggle them in Nepal Border Security Office of Gaur, on Wednesday, April 11, 2018. Photo: THT
Rautahat, April 11 A team of Armed Police Force arrested an Indian national with smuggled garments worth Rs 700,000 from Sonarniya of Maulapur Municipality in Rautahat last night. The arrested has been identified as Bikash Kumar Yadav, 16, of Motihari, India. Acting on a tip-off, the police team deployed at the border arrested Yadav as he was trying to enter Nepal along with illegal garments on a motorcycle. Police said smugglers used motorcycles to smuggle illegal items. As many as four smugglers were involved in supplying garments to the Nepali market from India by evading customs, said police. Police said smugglers tried to retaliate when they saw the police team. Other smugglers fled the scene after police opened fire in the air. Meanwhile, police made public the arrested, seized clothes and motorcycles at a press meet at the Armed Police Force Office, Gaur, today. APF SP Prem Raj Pokhrel said that Yadav, along with the seized clothes and motorcycle had been sent to Gaur Customs Office.
#Rautahat #Indian national #Maulapur Municipality #garments smuggling #Sonarniya
You May Also like: