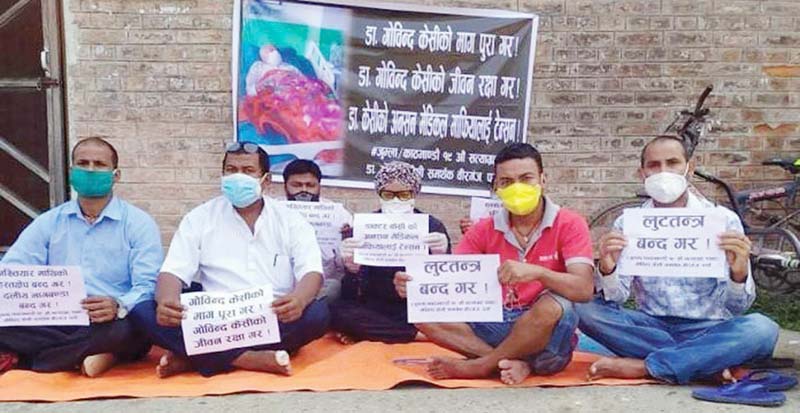 People holding a demonstration to express solidarity with Dr Govinda KC, in Birgunj, Parsa, on Friday, October 2, 2020. Photo: THT
Dr KC has been staging his 19th round of hunger strike demanding reform in the sector of medical education. In a show of solidarity, a group of Dr KC’s supporters staged a demonstration for one hour in front of Narayani Hospital in Birgunj today. They warned of intensifying their agitation until the government fulfilled the agitating doctor’s demands. Doctors associated with Nepal Medical Association, Parsa chapter, had also shown their solidarity with Dr KC today. Describing KC’s struggle for the good of the nation, his supporters asked everyone in the country to support the cause of KC’s agitation. The supporters’ group leader Jasapal Singh called on the government to address Dr KC’s demands at the earliest through dialogue. Meanwhile, Informal Sector Service Centre has called on the Government of Nepal to be accountable regarding the issues and concerns raised by Dr Govinda KC. A press release issued by INSEC today urged the government to implement the agreements it had reached with Dr KC in the past. “Considering the current situation, we would like to draw the attention of the government to create an environment to end Dr KC’s ongoing hunger strike in a dignified manner. Since the government has a constitutional obligation to protect the life of an individual, we urge the concerned authorities to take meaningful initiative to save Dr KC’s life,” read the release.
#Dr Govinda KC #solidarity with Dr Govinda KC #Dr Govinda KCs hunger strike
You May Also like: