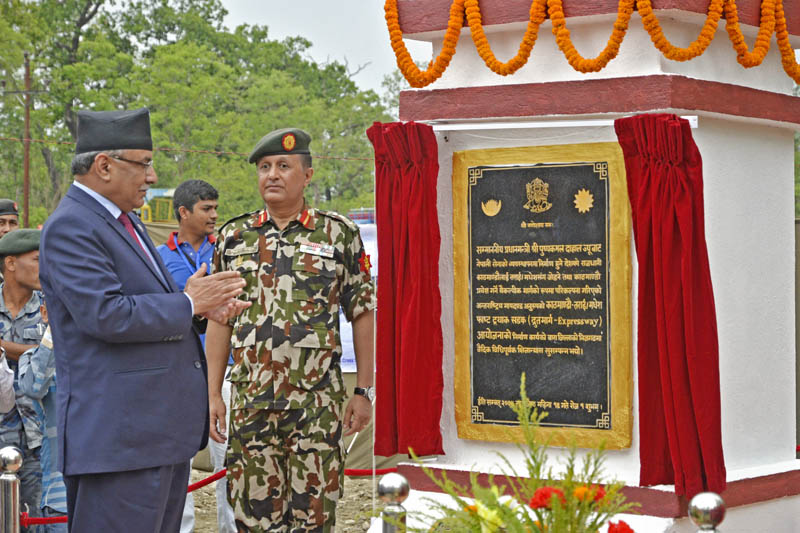 PM Pushpa Kamal Dahal unveils a foundation stone of Expressway in Nijghad of Bara district, on Sunday, May 28, 2017. Courtesy: PM's Secretariat
KATHMANDU: Prime Minister Pushpa Kamal Dahal on Sunday laid a foundation stone of the much-awaited Kathmandu-Nijghad fast track amid a function organised by Nepal Army at Nijghad in Bara district. The government on May 4 had decided to give the responsibility of constructing the Kathmandu-Tarai Fast Track Road to Nepal Army. On the occasion, PM Dahal said construction of such a project would enhance emotional unity and give confidence to Nepali people.  "Nepal as a nation has been proud of it", PM added. Dahal further said this project would unite the nation, strengthen national unity and materalise our dreams of attaining prosperity. Similarly, Minister for Physical Infrastructure and Transport Management Ramesh Lekhak said that the Nepali Army would complete the construction of the Expressway in stipulated time. He also claimed that this project would bind Kathmandu and Madhes psychologically and usher development in both regions. Minister of Defence Bal Krishna Khand praised PM's will and courage for constructing 76.2 kilometres expressway. Meanwhile, Chief of Army Staff Rajendra Chhetri said that the Nepali Army would be committed to development responsibilities and complete the project in 4 years' time to strengthen the relations with general public.
#PM Pushpa Kamal Dahal #Kathmandu-Nijghad fast track #Kathmandu-Tari Fast Track
You May Also like: