PM to participate in CNP campaign 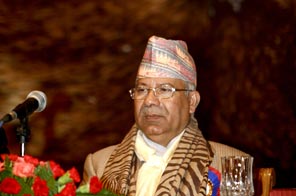 KATHMANDU: Prime Minister Madhav Kumar Nepal is flying to Chitwan on December 7 to uproot mikania micrantha, an invasive weed that has been affecting plants inside the Chitwan National Park (CNP).
According to Bishnu Rijal, PM's press advisor, the premier will catch a flight to Bharatpur on December 7 at 11 am and is scheduled to stay in a hotel inside the national park. "PM will stay in hotel Temple Tiger inside the CNP," said Dr Siddhartha Bajracharya, executive officer, National Trust for Nature Conservation.
Mikania micrantha, one of the worst perennial herbaceous weeds in the world, is a plant of Neotropical origin and is threatening the ecosystem of most countries falling into the moist tropical zones in South East Asia. The riparian, edge, grassland with sparse tree and shrub, low canopy area of natural and afforested forest were found to be highly invaded by the weed in the studies conducted by various researchers in the CNP.
"This is a serious problem in Chitwan. The forests there have been degraded due to the invasive species," said Khem Raj Bhattarai, a botanist. Temple Tiger is one of the four hotels that resumed business after the cabinet decided to permit their operation till 2012. There was a controversy over extending their term since the contract had expired in June 2009.
"The PM’s visit will attract the attention of authorities towards the problem," said Chanda Rana, an activist, who has been warning extinction of many species from the CNP. The PM will take part in the weeding campaign and will return to the capital on December 8.

#PM to participate in CNP campaign
You May Also like: