Biratnagar, January 28 Police, investigating the murder of Bikas Sardar, 45, of Morang’s Katahari Rural Municipality-7, have revealed that the murder was plotted by his wife, in an attempt to hide her extra-marital affair. Thirty-five-year-old Dayawati Sardar along with her boyfriend Badri Sardar, 36, and two others — Lalan Sardar, 36, and Mukesh Sardar, 25 — were paraded amidst a press conference on the district police office premises today. 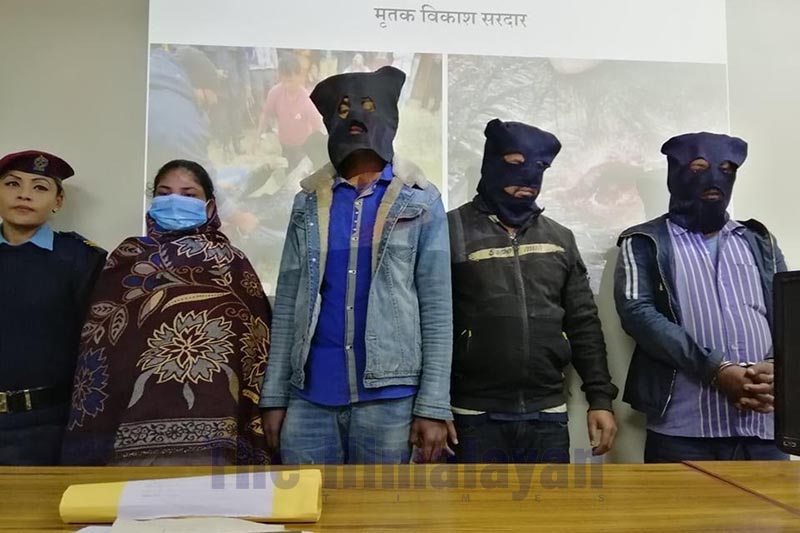 Police making public the accused arrested for murdering her husband in collusion with the lover and his friends, in District Police Office, Morang, on Tuesday, January 28, 2020. Photo: THT
According to SP Biswo Adhikari, Dayawati had plotted to kill her husband after the latter had learnt about her illicit affair with Badri. “Investigation has shown that Dayawati, together with her lover Badri, planned to clear Bikas out of their way after he learnt about his wife’s affair,” said the SP at the press conference, adding that they had employed Lalan and Mukesh to execute their plan. Bikas’s body with a wound on his head was found in a puddle in Gramthan Rural Municipality-3 on January 20. Police, citing the investigation, said Badri along with Mukesh and Lalan went to Bikas’s home on the evening of January 19 to drink liquor. After drinking, they took Bikas away from his home at about 10:00pm. Lalan hit Bikas on his head with an iron rod from behind. As Bikas collapsed on the ground from the impact, Lalan then stranguled him with a shawl and dumped his body in the puddle. Police recovered the iron rod used in the attack from the Judikhola River. According to SP Adhikari, the body was dumped in the puddle to give the impression that the death was caused by drowning. While police arrested Badri from his house on Saturday, three others were arrested on the basis of the statement of the former. “We’ve started further investigation into the case by securing remand from the court,” the SP said.
#Extra-marital affair #Katahari Rural Municipality #Morang murder case #Husband's murder
You May Also like: