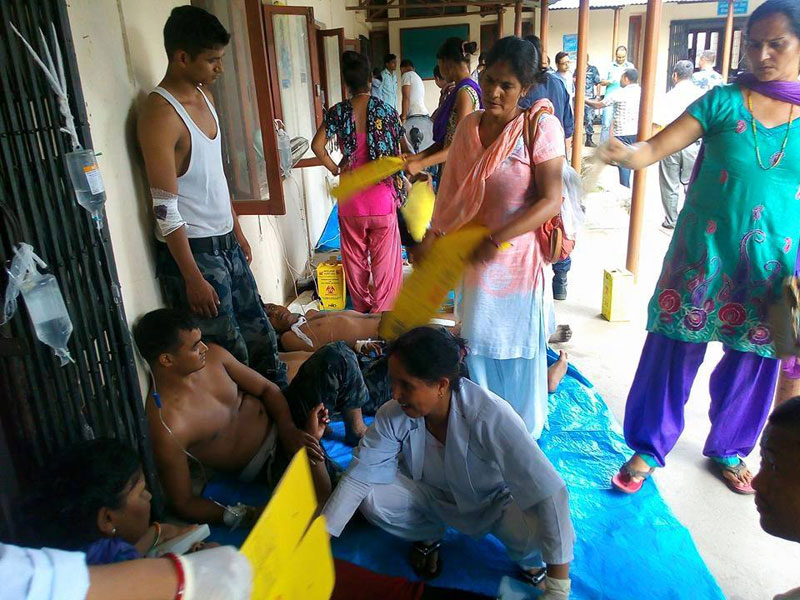 Injured police personnel undergoing treatment at the Tikapur Hospital in Kailali on Monday, August 24, 2015. Photo: THT
KATHMANDU: A parliamentary taskforce formed to study and probe into the August 24 Tikapur incident has submitted its report today. The taskforce coordinator Jeevan Shrestha submitted the report to the Social Justice and Human Rights Committee. The report says that the incident occurred due to political conspiracy and crime motives. The report has concluded that the incident was unimaginable, condemnable, regrettable, inhumane and violence-oriented. The report reads that the incident took place soon after the agreement on number and border of new provinces and the tussle between those demanding undivided Far-Western Region and Tharuhat autonomous province on the issue.

Injured police personnel undergoing treatment at the Tikapur Hospital in Kailali on Monday, August 24, 2015. Photo: THT
The taskforce inspected the incident sites, consulted local political parties, agitating sides, security bodies, local civil society and other stakeholders as well. The report has further urged the government to bring the culprits under the ambit of legal action. Likewise, the report has suggested providing compensation to the families of those killed in the incident and relief to the injured people. The report has pointed out the need of creating social harmony among the people and to provide the compensation for those whose property was vandalised after the incident.
#House panel #probe committee #Social Justice and Human Rights Committee #Kailali clash #Tikapur incident #Tikapur carnage
You May Also like: