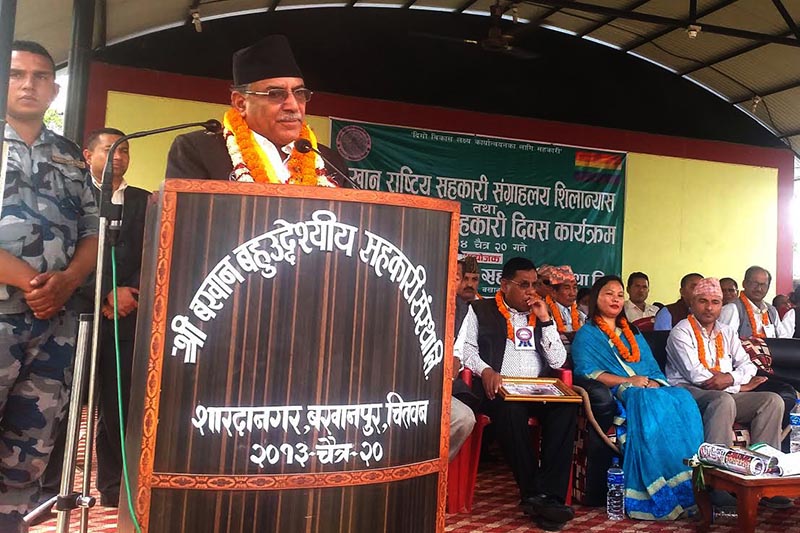 CPN-Maoist Centre Chair Pushpa Kamal Dahal addressing a programme, on Tuesday, April 3, 2018. Photo: THT
Chitwan, April 3 CPN-MC Chairperson Pushpa Kamal Dahal today stated that there was no new agenda in Prime Minister KP Sharma Oli’s upcoming state visit of India slated for April 8. Speaking at a function at Sharadanagar of Chitwan today, CPN-MC Chair Dahal said the visit would be crucial in strengthening bilateral ties between the two neighbouring countries. Dahal argued that unification of the two parties could not conclude though they had claimed it would take place before PM Oli’s India visit due to lack of adequate homework. He also claimed that they would announce the unification date on April 22 as per the recommendation of the unification task force. “As it is unification between two communist forces, it won’t happen on the basis of their representation in the Parliament but would be based on respectful equality. He underscored the necessity of economic policy incorporating public and private sectors and cooperatives for the prosperity of the country. Laying the foundation stone of Bakhan National Cooperative Museum, Dahal pledged necessary budget for timely completion of the construction. It is said the museum will be completed in two years at a cost of Rs 90 million, of which Rs 50 million has been released from the State coffer. Chairperson Mohan Singh Lama of the cooperative said they were planning to complete the museum in two years. They are planning to manage residence building for visitors, training hall, cafeteria and martyrs’ park. READ ALSO:
#Chitwan #Pushpa Kamal Dahal #Sharadanagar #Nepal-India #Prime Minister KP Sharma Oli #PM's visit to India #CPN-MC Chairperson #Bakhan National Cooperative Museum
You May Also like: