Protester killed in police firing in Bhardaha of Saptari 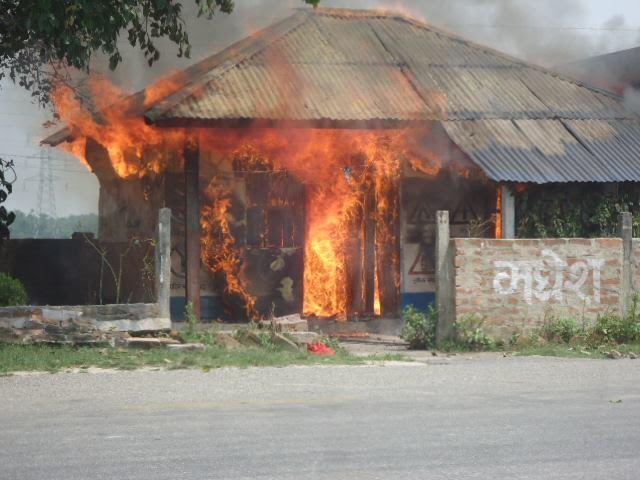 A traffic police beat torched by protesters in Kanchanpur of Saptari on Wednesday, September 9, 2015. Photo: ByasShankar Upadhyay
SAPTARI: A person was killed when security personnel opened fire on protesters during a violent clash at Bhardaha of Saptari on Wednesday. The deceased has been identified as Ram Krishna Raut (60) of Portaha VDC. According to Chief District Officer, Birendra Kumar Yadav, police opened fire in self-defence after protesters attacked security personnel at around 9 am. Similarly, Bijay Khidhari and Anil Thakur of Portahi-5 were injured in the incident. Police said that they resorted to baton charge and lobbed dozens of teargas shells to disperse the agitating mob. CDO Yadav informed that plans are afoot to issue a curfew order in some places of the district to take the situation under control. Earlier, Rajendra Kumar Raut was also killed in police firing at Bhardaha of Saptari on August 18. The supporters and cadres of various Madhesi parties have been imposing an indefinite Madhes bandh for the past four weeks. Traffic police beat torched in Kanchanpur Following the death of Raut, anguished demonstrators set ablaze a traffic police beat at Kanchanpur of Kanchanrup Municipality-5 in Saptari this afternoon. Police informed that the demonstrators set the traffic police beat on fire by sprinkling petrol. The beat was completely destroyed in the arson, police informed.
#Saptari #police firing #protester killed
You May Also like: