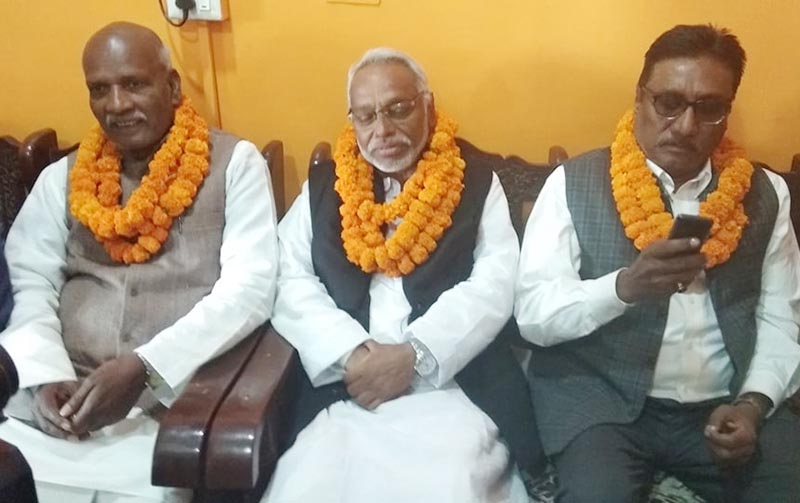 Presidium member of Rastriya Janta Party-Nepal Rajendra Mahato, along with other leaders, talking to mediapersons at a press meet organised in Biratnagar airport, Morang, on Thursday, March 7, 2019. Photo: THT
Kathmandu, March 8 The Rastriya Janata Party-Nepal’s decision to withdraw support to Prime Minister KP Sharma Oli-led government could snowball into friction between the RJP-N and the government, protests in Madhes, and breaking up of coalition between the Federal Socialist Forum-Nepal and the RJP-N in Province 2, where the two run a coalition government. The RJP-N withdrew support to the government on Wednesday, the day its lawmaker Resham Chaudhary was convicted by Kailali District Court in Tikapur carnage, accusing the government of not doing anything to amend the constitution or withdrawing false cases filed against its cadres. RJP-N General Secretary Manish Kumar Suman said his party decided to withdraw support to the government to keep the morale of party cadres and leaders high because it was immoral for the party to continue extending outside support to the government when it was ‘doing nothing’ to address its concerns. “Our party is fulfilling its poll pledge by agreeing to be a partner of the FSF-N in the provincial government, but the FSF-N may be prodded by the ruling party to dump our party. However, we are ready to face such an eventuality,” Suman added. He said he wanted to see how the FSF-N, which had signed a two-point deal with the Nepal Communist Party (NCP) before joining the government, would act to press the NCP to get its demands addressed. Columnist Chandra Kishore said RJP-N’s decision to withdraw support to the government indicated that the party, which was the last among other disgruntled factions, to take part in the elections held in 2018, would exploit every moment to get sympathy of voters across Madhes. “The RJP-N must have realised that even after elections, nothing is being done to meet its demands,” he added. Chandra Kishore said the RJP-N, which cited a number of reasons for withdrawing support to the government, might not resort to protest soon as it was preparing to hold its first unity General Convention. “But the RJP-N may try to raise Resham Chaudhary’s issue to shore up support across Madhes after its GC,” he said. He added that RJP-N leaders called on the FSF-N yesterday at Maleth in Saptari to quit the federal government and join protest against the federal government. “If the FSF-N does not respond to the call of RJP-N leaders, then that could create rift in the Province 2 coalition government and the RJP-N may eventually quit the coalition there,” Chandra Kishore added. Political analyst Tula Narayan Shah said the NCP that commanded almost two-thirds majority in the House of Representatives did not need support from the FSF-N or the RJP-N yet both parties extended their support to the Oli-led government. He said the RJP-N’s withdrawal of support was not justifiable because the decision to convict Chaudhary was taken by Kailali District Court and not the government. “If the RJP-N is really angry with the government, then it should also quit the government in Province 2. Then FSF-N could form a new government with NCP,” he said. Shah said NCP had an undeclared policy of creating rift between the FSF-N and the RJP-N by trying to keep one party as a coalition partner and the other in the opposition. READ ALSO:
#Federal Socialist Forum-Nepal #Tikapur carnage #federal government #FSF-N #Province 2 #RJP-N #Rastriya Janata Party Nepal #Resham Chaudhary #Tikapur carnage convict #Province 2 coalition
You May Also like: