Rawal slams Bhattarai for his remarks at Tharuhat-Tharuwan conference

Dhangadi, August 28 Nepal Communist Party (NCP) Sudurpaschim Province In-charge Bhim Rawal has flayed Samajwadi Party-Nepal Chair Baburam Bhattarai for the latter’s remarks at the recently held Tharuhat-Tharuwan National Conference in Tikapur. “Baburam Bhattarai, who attended the conference in Tikapur, where eight people were murdered four years ago, has incited people to start another agitation for ethnicity-based provinces. This is deplorable,” said Rawal, speaking at a press conference here today. Addressing the Tharuhat-Tharuwan National Conference, a few days ago, Bhattarai had said there was need to launch a fresh agitation demanding a separate province to secure the rights of the Tharu people. “Bhattarai’s remarks were malicious and aimed to destroy social harmony. The so-called Marxist leader of yesteryear, who is also a former prime minister of the country, seems to have abandoned Marxist ideology. 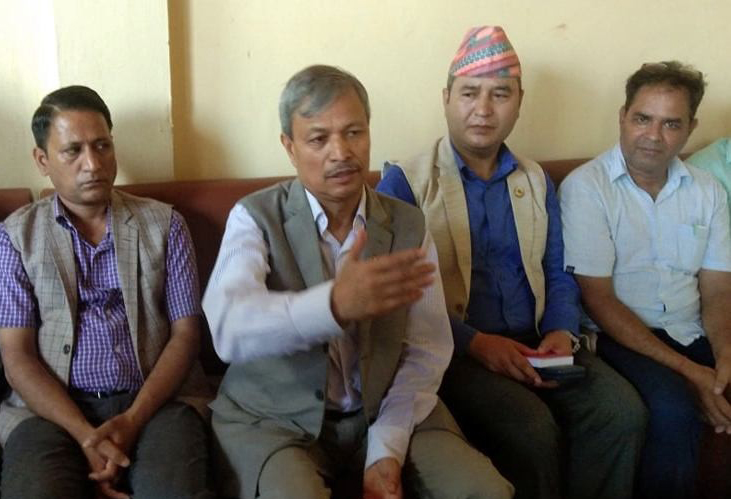 Nepal Communist Party leader Bhim Rawal addressing a press meet organised in Dhangadi, on Wednesday. Photo: THT
Now he is bent on creating ethnicity-based states, which is unfortunate,” Rawal said.“In fact, his attempts, ever since the time the new constitution was being drafted, have been to divide the Tarai and the hills,” Rawal added. He also blamed Bhattarai for being indifferent to the plight of the Tharu people who have been languishing in prison over the Tikapur incident. “Cunning leaders know how to provoke people. When a situation gets worse, they disappear from the scene. It’s finally common people and those provoked who have to bear the brunt of untoward incidents,” said Rawal who is also a standing committee member of the ruling NCP. He dismissed chances of forming ethnicity-based provinces as demanded by Bhattarai. “If we want ethnicity-based provinces, the country will have 124 provinces, one for each ethnicity. How is that practical?” he questioned. The ruling party leader argued that holding a meeting of the Council of Ministers through video conferencing was wrong from legal and security perspectives. “The PM has delegated his power to his deputy. I don’t see any reason why he chose to hold the Cabinet meeting from abroad through video conferencing compromising security of the country,” he said. “What if the provincial and local governments started the same practice?” he asked.
#Bhim Rawal #Tikapur incident #Nepal Communist Party (NCP) #Tharuhat-Tharuwan National Conference #Minister Yogesh Bhattarai
You May Also like: