Locals of remote Bajura village use rope to cross rivers 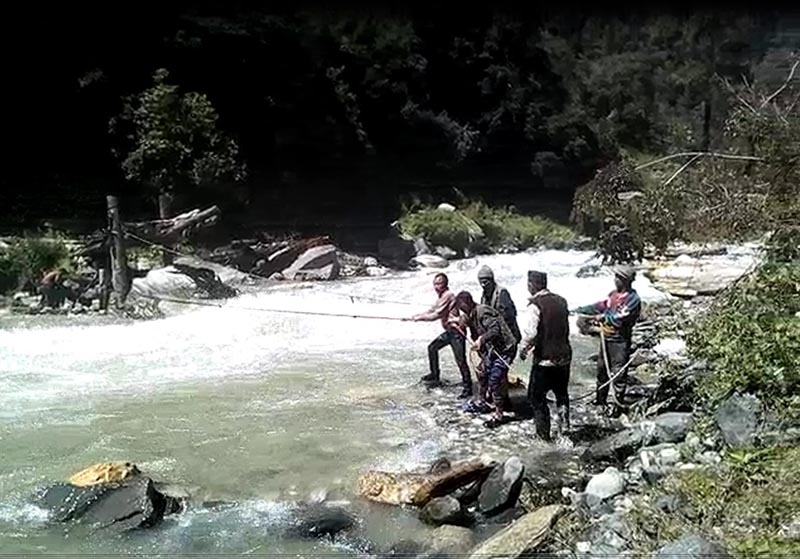 Locals crossing Chhindu River in Himali Rural Municipality-3 of Bajura district with the help of a rope. Photo: Prakash Singh/THT

Locals crossing Chhindu River in Himali Rural Municipality-3 of Bajura district with the help of a rope. Photo: Prakash Singh/THT
BAJURA: Locals are compelled to use ropes to cross Chhindu and Gumba rivers to reach remote Gumba village in Bajura in lack of suspension bridges. The rivers connect Gumba village with Baudi village in Himali Municipality-3 of the district. As the rivers are large, it is difficult to cross them even during winters. People have been using ropes to cross the rivers, even while they are transporting cattle and other animals, said ward member Jagat Bahadur Lama. According to a local, Bayabuddha Laalu Kunwar, seven people have disappeared while crossing the rivers as per his knowledge. Locals said that Gumba river which is comparatively smaller is less troublesome. However, Chhindu river is difficult especially in the monsoon. He added that the wooden bridge constructed earlier had also been washed away. The lack of bridge has also caused a problem in commuting to mountains for people who occasionally visit the region to collect herbs.
#Bajura #Gumba village #chhindu river #baudi village
You May Also like: