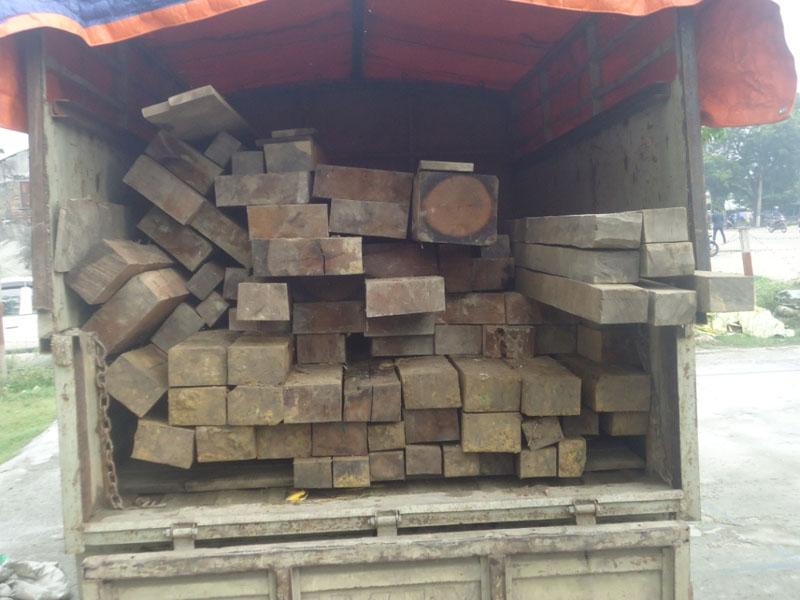 RAUTAHAT: Police have confiscated 83.8 cubic feet of sal timbers worth Rs 350,000 from Pourai in Rautahat being smuggled taking the advantage of ongoing Madhes agitation, in wee hours of Friday night.

The timbers were cut down illegally from the National Forest Area (NFA) located in Chandrapur Municipality in Rautahat. The smuggling of woods from the NFA and the forest of Judibela Ranger Post has increased for few months after the staff attendance became irregular in forest offices and the armed forest guards stopped patrolling, due to the ongoing agitation in Madhes, the locals said.

The raw sal woods from the NFA, cut into different shapes, loaded on pickup van (Na 1 Cha 8803) heading eastward, were seized at Pourai VDC along the East-West Highway around 1 am on Friday, informed Chandrapur Area Police Office.

The driver and the alleged smuggler darted off when they saw the police, who patrolled the Highway area regularly. Locals had tipped off about the ongoing smuggling activity to Pourai Police Post, informed DSP Manoj Kumar Yadav of Chandranigahapur Area Police Office.

Police arranged tight security in Judibela Forest Area after the locals had informed that the raw sal woods were loaded on vehicles and were being transported to Sarlahi district in the involvement of the Forest Ranger Hari Shankar Sah, said the DSP.

Assistant Forest Officer Akhilesh Gupta has agreed that the smuggling from the NFA has increased for few months concurring with the agitation in Madhes.

The impounded van with the sal timbers has been handed over to the District Forest office for further investigation, said the DSP.