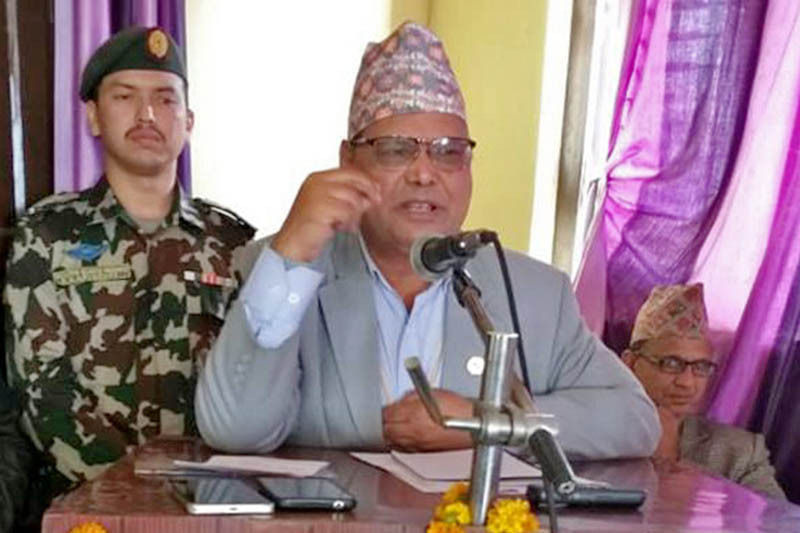 Federal Parliament Speaker Krishna Bahadur Mahara speaks during an interaction programme in Gaighat of Udayapur district, on Tuesday, December 04, 2018. Photo: Shyam Rai
GAIGHAT: Speaker of the federal parliament Krishna Bahadur Mahara has said that failure to create stability in geopolitics could put federalism in jeopardy. "Nepal, a yam between two big nations, should move ahead by establishing cordial relations between the two emerging powers of the world -- India and China," Mahara said while addressing an orientation programme on 'Implementation of Federalism and Constitution' organised by Udayapur District Coordination Committee today. "We have to establish mutual and harmonious relationship with these two countries," Mahara said, adding, "the relationship between our neighbouring nations would help Nepal institutionalise federalism and vice-versa. He further added that external forces were trying to foil federalism in Nepal and that all must be alert to denounce their plan. "Referring to earlier systems in Nepal, Mahara said they all failed because they were unable to replicate people's aspirations and that the new system under leftist government would be based on people's aspirations and sentiments." Nepal Communist Party (NCP) leader Mahara asserted that federalism won't be dissolved at any cost; rather it would be amended as per the need of the hour. He further said the country cannot attain economic prosperity unless it maintains its Balance of Payment, referring to Nepal's huge trade deficit. "Overhaul change is required in the field of development works and financial regulation so as to attain economic prosperity in the country."
#federalism #Krishna Bahadur Mahara
You May Also like: