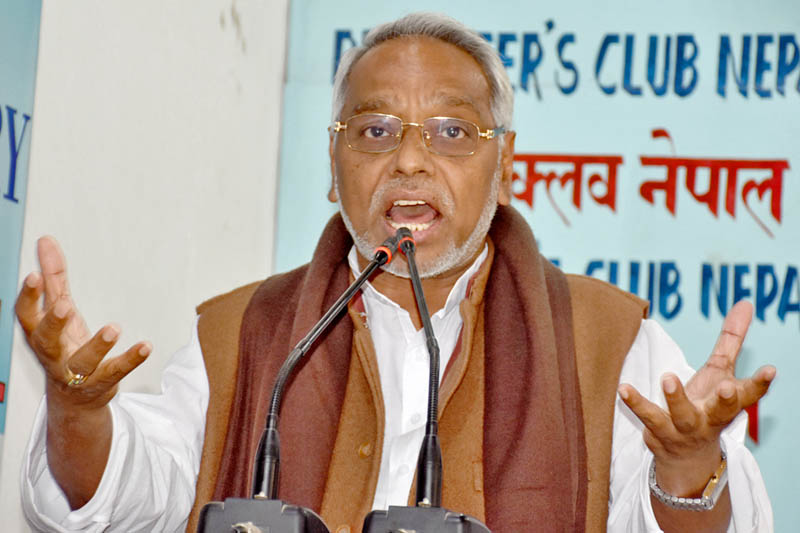 Senior leader of Rastriya Janata Party Nepal Rajendra Mahato speaks at a programme organised by the Reporters Club in Kathmandu, on Thursday, May 11, 2017. Courtesy: Reporters Club
KATHMANDU: Senior leader of Rastriya Janata Party Nepal Rajendra Mahato has urged the government to create a conducive environment for second phase of local polls by amending the constitution at the earliest. Speaking at an interaction programme organised by the Reporters Club in the Capital on Thursday, Leader Mahato has also warned to obstruct the second phase elections in the Tarai region if their demand for constitution amendment is not met by May 18. According to him, the government must withdraw different cases against RJPN cadres, release the detainees and increase the number of local bodies as per population from Jhapa to Kanchanpur districts. "The government should implement a three-point agreement to create a conducive environment to hold the polls in the Tarai region," he added. Mahato also warned to disrupt elections if the government tried to implement the constitution without passing an amendment bill tabled in the parliament. He also warned to announce stern stir to thwart the second phase polls. Speaking on a different note, Mahoto said RJPN would not make the same mistake made by Upendra Yadav-led Federal Socialist Forum-Nepal by taking part in the elections.
#local polls #Federal Socialist Forum-Nepal #Rajendra Mahato #Statute amendment #Rastriya Janata Party Nepal
You May Also like: