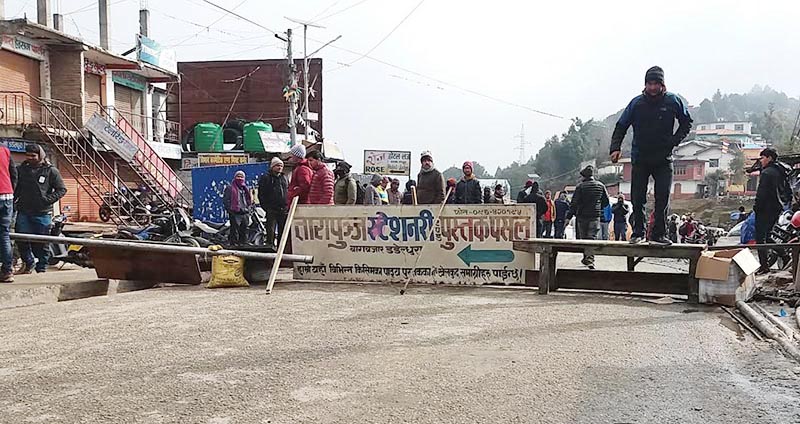 Locals obstructing vehicular movement demanding safety and security in Bagkhor, Dadeldhura, on Monday, January 7, 219. Photo: THT
Dadeldhura, January 7 As many as 10 shops were reduced to ashes in a fire that broke out at Bagkhor of Amargadi Municipality, Dadeldhura, last night. Police said hotels belonging to Damber Rawal, Nawaraj Panta, Surendra Mahat, vegetable shops of Surendra Sarki, Keshab Kadayat, Monaj Budhaaire, Hom Bahadur Jora, Bhoj Bahadur Thakuri, grocery shop belonging to Bahadur Shah and the fish shop of Indian citizen Abasar Husain in the municipality were gutted. Police said property worth Rs 50 lakh was gutted in the blaze. Locals, Nepal Police, Nepali Army and Armed Police Force personnel had brought the blaze under control after two hours, according to District Police Office, Dadeldhura. This is the fourth incident of fire that has taken place the municipality in the last one week. A grocery shop belonging to Narayan Bhatta, a local, was reduced to ashes after a fire broke out at the bus park last Sunday at around 9:00pm. Similarly, grocery shop belonging to Jit Bahadur Tamauli was also gutted in yet another incident of fire on Wednesday and three shops belonging to Lok Raj Joshi  were gutted on Thursday. Local businessmen and police have started joint patrolling after increasing incidents of fire in the area. Police said the patrolling team had arrested Lunif Rawal, 16, for his alleged involvement in the incident. According to police, Rawal has already confessed his involvement in the incident that took place yesterday, but he has denied his involvement in other incidents of fire that took place in the last one week. Rawal has admitted that he had set the shops on fire after sprinkling petrol, said police. Meanwhile, locals obstructed vehicular movement in Baghkhor and demanded safety and security for their lives and property.
#Dadeldhura #Bagkhor #Amargadi Municipality #Dadeldhura fire
You May Also like: